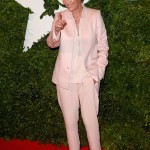 “Hey! Don’t take my picture.” Photo: Chris Jackson/Getty Images England’s most valuable export Emma Thompson picked up a Comedy Award at the Evening Standard British Film Awards on Sunday for her role in “The Legend of Barney Thomson,” wearing a three-piece pink Stella McCartney suit that was as fresh in color as in silhouette. The boxy jacket featured a modified mandarin ... END_OF_DOCUMENT_TOKEN_TO_BE_REPLACED