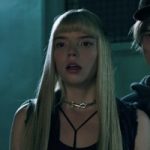 20th Century Fox offered one hell of a Friday the 13th treat last week when they debuted the first trailer for the secretive X-Men movie The New Mutants. The film, directed by Josh Boone (The Fault in Our Stars), had been teased as being a YA-tinged horror film of sorts, and indeed that’s exactly what was revealed in that trailer: a very grounded, creepy haunted house film ... END_OF_DOCUMENT_TOKEN_TO_BE_REPLACED