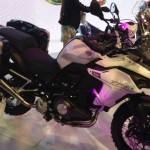 DSK Benelli’s showcase of four new bikes at the 2016 Auto Expo was of keen interest to enthusiasts. While there were no launches announced at the Expo, at least two of these motorcycles will be launched in India later this year. Of interest to many enthusiasts, and the motorcycle touring community in particular, is the latest adventure tourer from ... END_OF_DOCUMENT_TOKEN_TO_BE_REPLACED