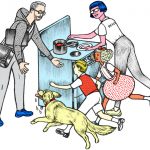 Millennials, generally defined as people born between 1982 and 2000, were supposed to be the generation that forged what has been called “a new national consensus” in favor of gender equality. Indeed, in February the prominent Columbia professor Jeffrey Sachs labeled the 2016 election, where an extremely qualified female candidate lost to a man with a history of disrespecting women, ... END_OF_DOCUMENT_TOKEN_TO_BE_REPLACED