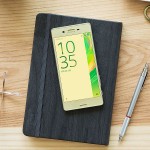 Sony took the stage at MWC 2016 to announce the re-branding of its Xperia brand, aiming it at an ecosystem of connected devices, alongside the launch of three X smartphone series. Although the company did not give even a slightest hint about its next flagship Z handsets at the trade show, it revealed its plans that might come as a ... END_OF_DOCUMENT_TOKEN_TO_BE_REPLACED