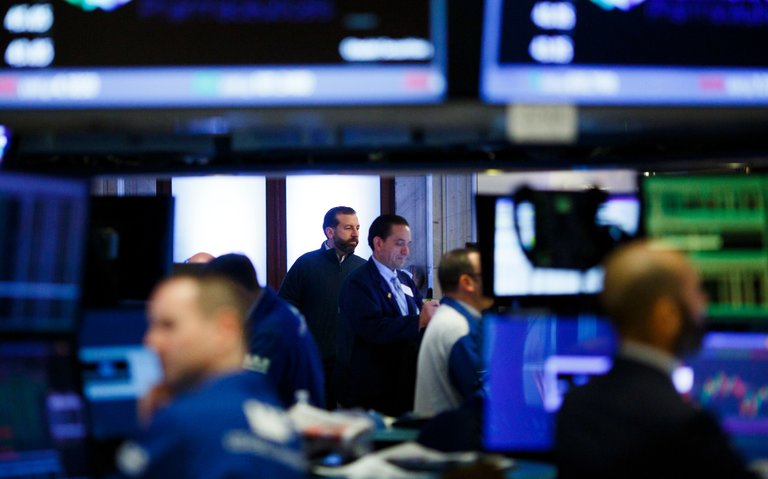 Traders at the New York Stock Exchange on Monday after a day of gains. Many in business are concerned about the trade-offs a 15 percent corporate tax rate could entail.

The investor enthusiasm that began with President Trump’s unexpected victory in November has burst out anew on Wall Street, even as Washington remains gridlocked and evidence of any real pickup in the economy is scarce.

Stocks have surged 5 percent since Mr. Trump took office on Jan. 20. And that is on top of the 6 percent rally that followed his win in November.

The cause for bullishness on Tuesday was Mr. Trump’s new call to cut the corporate tax rate to 15 percent, from 35 percent — deficits, perhaps, be damned.

“C.E.O.s are pragmatists,” said Bill George, a Harvard Business School professor who formerly ran Medtronic, the giant medical-device maker. “If you cut my taxes and ease up on regulations, then I will like you. The bigger question is, can he get anything done?”

The market impact of the Trump presidency is based so far on prospects — with details and congressional dynamics left to be sorted out — rather than accomplishments.

But plenty of other factors are providing a tailwind for traders, including unexpectedly strong earnings reports from blue-chip companies like Caterpillar and McDonald’s and the receding chances that French voters will turn their backs on Europe.

Technology giants like Apple, Facebook and Amazon have shown robust growth, lifting the Nasdaq index past 6,000 for the first time on Tuesday, a 26 percent gain from a year ago.

Blair Effron, a founder of Centerview Partners, a prominent independent investment bank on Wall Street, said he believed that beyond any immediate policy shift in Washington, investors had taken their cue from signs of healthier growth globally.

“Europe and emerging markets are doing better,” Mr. Effron said, “and there is an underpinning of global stability and growth that are having much more of an impact than people think.”

Not all the signals domestically are coming in strong, however. The government’s initial report on the economy’s first-quarter performance is due Friday, and it is expected to be weak.

And even if Mr. Trump manages to get Congress to pass a tax overhaul, and corporate profits then boom, that will not necessarily translate into better overall economic performance, warned Diane Swonk, a veteran independent economist in Chicago.

So far, Ms. Swonk said, the Trump administration seems to favor the former. And while Wall Street will always reward rising corporate profits with higher share prices in the short term, the country’s long-term prospects will be undermined if that trend is not accompanied by policies that lead to faster economic growth.

“It’s easy to cut taxes, but reform is harder,” Ms. Swonk said. “It’s more about closing loopholes than reducing rates because if you just go to 15 percent, you’re going to leave a large hole in the federal budget.”

While the prospects for a tax overhaul are murky on Capitol Hill, especially in light of the failure of House Republicans in March to agree on a replacement for President Barack Obama’s signature health care law, executives say they are encouraged by the business-friendly stance of the White House.

Bruce Van Saun, chief executive of Citizens Financial Group, said he was initially concerned by Mr. Trump’s pronouncements on trade and immigration when he took office in January.

“I feel better because in the first 100 days, the president’s tone on those issues has moderated,” Mr. Van Saun said.

At the same time, executive actions, like requiring government agencies to roll back two existing regulations for every new one, have also played well with business leaders, especially in the financial services industry.

“That’s caused some of the regulatory apparatus to pause and appreciate there is a new sheriff in town and the rules of the game are changing,” said Mr. Van Saun, who took over at Citizens, a regional banking chain based in Rhode Island, after more than two decades on Wall Street.

What is more, Mr. Van Saun added, “the commitment to the positive elements of the platform — lower taxes, less regulation and pro-energy policies — continues to be there.”

Energy industry executives are hoping that Mr. Trump will deliver on his promises to reduce regulation in their sector and open up new areas for drilling and development.

“If you watch what he does as opposed to the noise around him, so far so good,” said Charif Souki, chairman of Houston-based Tellurian and a leading industry spokesman for increasing natural gas exports from the United States.

“I think generally he’s doing well,” Mr. Sheffield said. “I think the Republicans have to get together and get something done.”

To be sure, Mr. Trump has spent more time listening to business leaders in the first few months of his presidency than actually delivering on what they want.

“In the first 100 days of his presidency, Trump has given more attention to C.E.O.s than Obama did in eight years,” said Mr. George, who is not a supporter of Mr. Trump. “What he does is a whole different story. But they do feel like he’s listening, and there’s a lot of ego gratification in having the president listen to you.”

If the president cannot deliver, or the economy fails to pick up speed, investors may be setting themselves up for a fall, warned Torsten Slok, chief international economist for Deutsche Bank.

“Expectations for the future are wild,” Mr. Slok said. “There is quite a disconnect between what the data suggests and where the stock market is trading.”

Still, even if it looks frothy, the euphoria is not approaching tech-bubble levels circa 2000.

“In 2000, the price-to-earnings ratio for Nasdaq was 170; today it is trading at 26 times,” Charlie Bilello, the director of research at the investment advisory firm Pension Partners, said, referring to a common gauge for measuring stock valuations. “That is not cheap, but it’s not crazy. We are definitely not at the level where the average guy quits his job to trade stocks.”

That may be true, but there is no doubt that the explosion in the market value of these companies has taken many investment professionals by surprise, even if most investors agree that their corporate fundamentals are solid.

Since the financial crisis of 2008, four stocks — Apple, Facebook, Google and Amazon — have been at the heart of the United States stock market rally. They have now all reached sizes — $400 billion to $800 billion — that in terms of value compare with the gross domestic product of many countries.

With the rollback of the health care law put off and big infrastructure spending plans still up in the air, bulls and bears alike on Wall Street and in corporate boardrooms will be focused on the prospects for a tax overhaul in the coming months.

But within the business community itself, there are sharp differences between industries that stand to gain and those that stand to lose as the tax code is redrawn.

A low overall corporate tax rate would be great but would not be worth giving up provisions like the mortgage interest deduction or homeowners’ ability to write off state and local taxes, said William E. Brown, the president of the National Association of Realtors.

At the same time, smaller manufacturers and others worry that they might still be subject to a nearly 40 percent rate even if larger corporations use their political clout to guarantee a hefty cut.

Suku V. Radia, the chief executive of Bankers Trust, Iowa’s largest independently owned bank, said he was eager to learn more details, like the impact of a major tax cut on the budget deficit.

“It is obviously a significant drop from where we are currently, and I’d like to at least be able to better understand what do we do to make up for it,” he said. “What is the loss of revenues going to be, and how are we trying to fill the gap?”

Whatever details come out of the White House, getting a tax bill passed will be anything but easy.

“I don’t think there is such a thing as ‘tax simplification,’” Mr. Radia said. “It’s inherently complicated.”