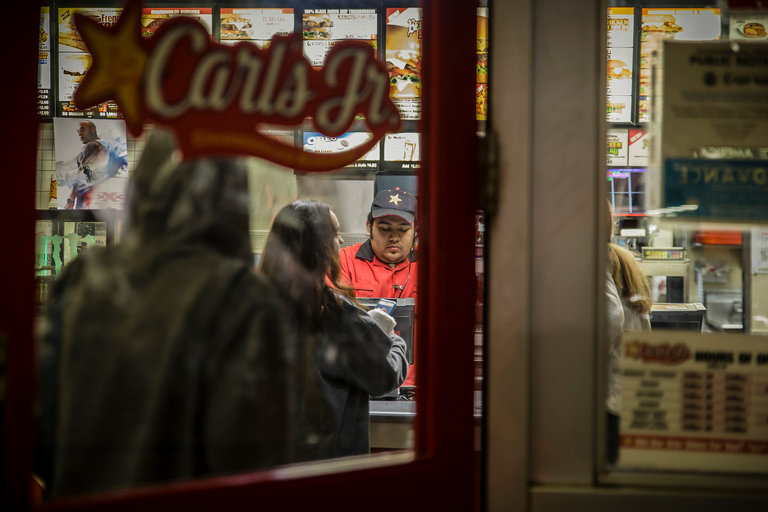 When Jason Marker, the new chief executive of the company that owns Carl’s Jr. and Hardee’s, met with several of his marketing executives this week, one of his first requests was for screens to be installed in the company’s headquarters to display real-time social media conversations about its brands.

It is the sort of setup that already exists at the advertising agencies representing Mr. Marker’s company, CKE Restaurants, and that the company has built internally for events like the Super Bowl, said Brandon LaChance, the director of advertising and digital marketing for the chains, who was at the meeting. But now, he added, that information will be available daily to the whole company, which is based in Franklin, Tenn.

“In most organizations, supply chain, H.R., legal or whatever it is — they’re not exposed to the same kind of stuff as marketing because it’s not traditionally in their area of responsibility,” Mr. LaChance said, comparing the news flow on such screens to the humming activity of stock quotations, chyrons and headline tickers on CNBC. Now, he said, “anyone can take a look at that and see how what they do impacts the business.”

The request by Mr. Marker, just days into his new role, underscores how seriously the highest levels of corporations are taking social media, which has provided brands with unprecedented access to consumers while exposing them to new risks. The perils were on full display this month as United Airlines and its chief executive dealt with the catastrophic fallout from a video showing a paying passenger being violently dragged off a flight on Sunday, and as Pepsi was castigated for a tone-deaf commercial that invoked imagery from the Black Lives Matter movement.

In each instance, consumer outrage was amplified after initial responses from the companies were viewed as too slow and unapologetic.

“The beautiful and the scary thing for marketers is that for the first time in history, they now have this open door for a two-way dialogue with consumers,” Mr. LaChance said. “But when you do open that door to a dialogue, you better be ready to have it with them.”

Crises that play out on social media are increasingly being viewed as threats to a company’s profits instead of short public relations episodes, said Leslie Gaines-Ross, chief reputation strategist at the public relations firm Weber Shandwick. “One tweet, just one dangerous tweet, can really impact your share price,” Ms. Gaines-Ross said.

Weber Shandwick uses a tool to simulate crises for executives, inventing a plausible firestorm then running a drill exposing them to a litany of “challenging media inquiries, news articles, social channel conversations and videos as you witness the immediate implications of your responses (or non-responses),” according to a description online.

These instances are not limited to social channels. The United video has been reposted on Twitter more than 170,000 times, and has circulated well beyond that on television broadcasts, news websites, YouTube and Facebook. Oscar Munoz, the chief executive of United, has been criticized for not making a full-throated apology until Tuesday afternoon.

In recent months, companies have been girding themselves for social media grenades, whether it is critical Twitter posts from President Trump, or campaigns from socially and politically conscious consumers holding brands to account for where they advertise, including “The O’Reilly Factor,” “The New Celebrity Apprentice” and Breitbart News.

Maryam Banikarim, Hyatt Hotels’ chief marketing officer, said that while most executives outside the marketing department had long been aware of the impact that social media interactions can have on their companies, the presidential election drove the point solidly home.

“Obama got a lot of points for engaging with social media and doing things on Saturday Night Live, and that seemed record-breaking,” she said. “We today have a president that sometimes breaks news on Twitter before he does it anyplace else, and that’s a marked difference from a year ago. If you didn’t understand the power of social media before, how can you not understand it after this election cycle?”

That has placed a renewed focus on how major brands approach their online accounts and handle potentially problematic situations before they reach a fever pitch, particularly when they’re dealing with huge amounts of data from the likes of Facebook, Twitter, YouTube, Google search and Instagram.

Hyatt monitors its social networks and mentions of its brands around the clock, usually responding to people in less than 10 minutes, Ms. Banikarim said, adding that employees are trained to respond to everything and to be aware that all interactions are public.

“It used to be that consumers interacted with you through call centers or they wrote you, so it was a one-on-one communication,” Ms. Banikarim said. “Now, you may be responding to one person’s Twitter, but everyone is seeing it, so you have to be conscious you have a public audience.” That includes private messages, she said, noting that screenshots can be taken and shared.

Unilever, the consumer goods giant, relies heavily on deep analytics and powerful language processing tools to understand the “tsunami” of data it sees from social media, said Stan Sthanunathan, its executive vice president of consumer and market insights. He said that 25 percent of his team now worked with social media, compared with 5 percent two years ago.

While the tools are more often used to listen to consumers online and identify trends that can lead to new products, like Unilever’s recent introduction of Lipton’s Matcha Green Tea, he said, they can also help the company determine when to respond to potential problems.

“Sometimes silence is golden,” he said. “That’s why it’s very, very important to have analytics, because there are situations where somebody says something and you end up overreacting, and by responding to that very quickly, you may actually fuel the whole fire. With analytics, you may actually note it’s tapering off and showing signs of decline.”

The tools used to monitor social media have evolved vastly from their early days as “very blunt instruments of listening,” when they simply measured the volume of mentions or general sentiment without context, Mr. LaChance of CKE Restaurants said.

That helped the marketers keep track of consumers who were talking about Carl’s Jr. and Hardee’s, rather than politics, this year when Andrew Puzder, the company’s former chief executive, was a contentious nominee for labor secretary.

“As a brand, we were absolutely prepared for that, and we closely monitored it,’’ he said, “but we were able to understand what mentions were adjacent, if you will, versus people really talking about anything substantive of their feelings towards our brands.”