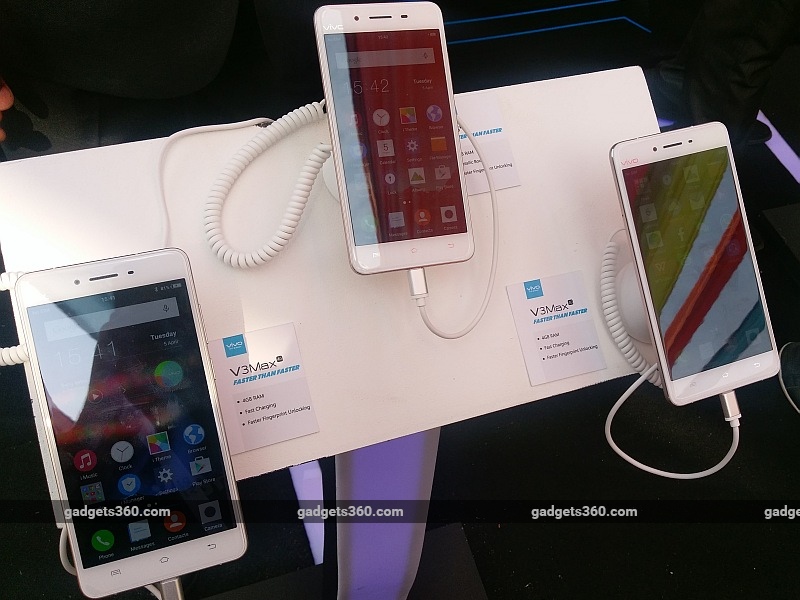 Chinese smartphone brand Vivo has launched two new smartphones in India – the V3 and V3Max, priced at Rs. 17,980 and Rs. 23,980 respectively. This is the first time the company has unveiled the smartphones globally, and is touting their ‘premium features’ and speedy fingerprint recognition.

The Vivo V3 runs the company’s Funtouch OS 2.5 based on Android 5.1 Lollipop. It sports a 5-inch (720×1280 pixels) display, and is powered by an octa-core Qualcomm Snapdragon 616 SoC coupled with 3GB of RAM. The smartphone bears a 13-megapixel rear camera, and an 8-megapixel front-facing camera. It sports 32GB of inbuilt storage that’s expandable via microSD card (up to 128GB). It offers the standard connectivity features, including 4G LTE support in India. It runs on a 2550mAh battery.

The Vivo V3Max is nearly identical to the Vivo V3, with differences in battery, display size, memory, and processor. It sports a 5.5-inch (1080×1920 pixels) display complete with 2.5D Corning Gorilla Glass, runs on an octa-core Qualcomm Snapdragon 652 SoC, bears 4GB of RAM, and is powered by a 3000mAh battery. The other specifications appear to be identical to the Vivo V3.

Apart from the fast fingerprint unlocking, the company is also touting a newly-incorporated split-screen feature that allows users to multitask – for example, watching a movie while chatting with a friend.

Commenting on the launch, Alex Feng, CEO of Vivo India said, “The V Series designed with creativity and equipped with state of the art technology will be a landmark for Vivo India. India remains our prime focus and the launch of these models is a testimony to our commitment to cater to the ever growing demand of meticulous customers in India and worldwide. The V3 and V3Max offer an unbeatable position of cutting edge technology, impressive looks, and Hi-Fi music quality in the industry.”