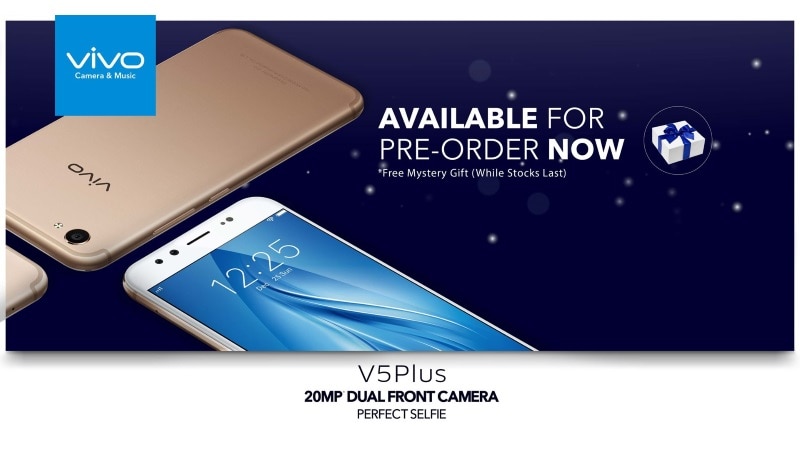 Earlier this month, Vivo started sending out invites for the India launch of its V5 Plus smartphone that is scheduled to be on January 23. Now the smartphone has been made available for pre-orders by a third-party retailer in Malaysia and the specifications of the device have been revealed. The smartphone has been priced at MYR 1,799 (Rs. 27,400) by the retailer.

As already announced by the company, the biggest highlight of Vivo V5 Plus is the dual front-facing camera setup. The specifications detailed on Malaysian website DirectD further reveal that the V5 Plus runs on Android Marshmallow and sports a 5.5-inch full-HD (1080×1920 pixels) display. It is powered by an octa-core Snapdragon 625 SoC coupled with 4GB of RAM. However, the area where the phone truly shines is its camera department.

In terms of optics, the dual-SIM smartphone is listed to come with a 16-megapixel rear camera, tagged with LED flash and a dual-camera setup at the front (20-megapixel + 8-megapixel sensors). The Vivo V5 Plus comes with inbuilt storage of 64GB, which is expandable via microSD card (up to 256GB). It houses a 3160mAh battery that supports fast charging. In terms of connectivity options, the V5 Plus offers 4G LTE, Wi-Fi 802.11ac, Bluetooth 4.2, and GPS.
As per the retailers listing, the smartphone measures 153.8×75.5×7.6 mm and weighs 158.6 grams. The Vivo V5 Plus comes with a fingerprint scanner embedded right into the home button. To recall, the Vivo V5 Plus smartphone was first unveiled alongside Vivo V5 at latter’s launch event in November.

We will get to know the pricing of the smartphone for India when the phone launches in the country next week.