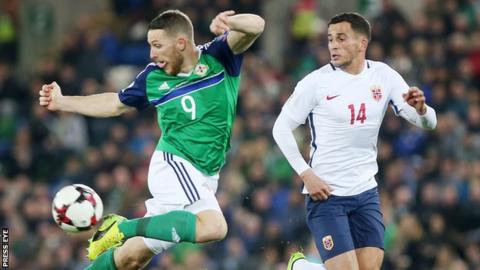 Both strikers scored in the first half to secure a vital win at Windsor Park.

“They both give you that energy at the top end of the pitch. Conor likes to fight for the ball and Jamie is the same,” said O’Neill.

“Jamie set the tone from the off and the rest of the team followed suit.”

“He won his first header, then there was some great link-up play and it’s a superb finish for the goal.”

The victory sees Northern Ireland lie second in the group on 10 points, two points ahead of the Czech Republic, with a game away to Azerbaijan on 10 June next on the agenda.

“This was a great result for us and we can now look forward to a difficult game in Azerbaijan but we know a win there would put us six points clear of them and we are now seven ahead of Norway. We are looking at the Czech Republic and they will be looking at us.

“There is still a lot of football to be played but when you get to this point, we just want to maintain the form we are in and ensure that when the Czech Republic and the Germans come here they are special nights to look forward to.

“We’ve played five games, have kept four clean sheets and the only team to score against us are the world champions.

“We’ve scored 10 goals at home so there are a lot of positives in this campaign.”

O’Neill pronounced himself pleased with every aspect of his side’s play against Norway, hailing it as “a fantastic performance”.

“Every player we used, the 11 that started and the three that came on, I couldn’t have asked any more. To a man, they were fantastic,” he said.

“It was a very competitive game and Norway played very directly so we had to deal with that.

“We have three top-class centre-halves of real Premier League quality and we just looked very strong.

“Conor McLaughlin and Stuart Dallas gave us a great shift down the sides and Chris Brunt showed his quality in midfield, while Steven Davis led from the front as captain, as he always does.”

Northern Ireland suffered a scare in the first half when Gareth McAuley sustained an injury but the West Bromwich defender was able to stay on the pitch.

“Gareth got a bad knock but if he had come off, it would probably have meant us changing our system, which ideally we didn’t want to do,” added the NI boss.

“We had one or two other bumps and bruises but we competed fantastically and played some very good football as well.”