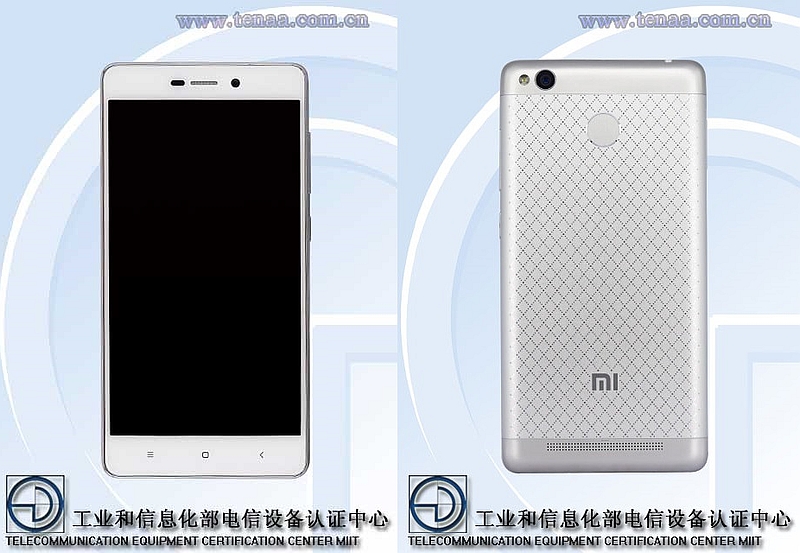 Xiaomi recently launched its flagship smartphone, the Mi 5, and now appears to be gearing up for the launch of a new variant of the Redmi 3 that features a fingerprint sensor as well.

To recall, the Xiaomi Redmi 3 smartphone that was launched in January this year came without any fingerprint sensor. The fingerprint sensor sporting Redmi 3 was spotted on Tenaa, the Chinese telecommunications certification authority. The listing not only shows the smartphone but also reveals its specifications.

According to the listing, the upcoming version of the Xiaomi Redmi 3 smartphone features the same innards as the already launched non-fingerprint sensor version. However, the images in the listing clearly show a circular fingerprint sensor placed at the centre of the textured back panel. As per some reports, the smartphone is rumoured to cost CNY 799 (roughly Rs. 8,200). The non-fingerprint version of Redmi 3 was launched at CNY 699 (roughly Rs. 7,000).

For specifications, the Xiaomi Redmi 3 features a 5-inch HD (720×1280 pixels) display and packs an octa-core Qualcomm Snapdragon 616 processor, with four cores clocked at 1.2GHz, and four cores at 1.5GHz. The handset includes 2GB of LPDDR3 RAM, Adreno 405 GPU, as well as 16GB of inbuilt storage that’s expandable via microSD card (up to 128GB). One of the biggest highlights of the Redmi 3 is its 4100mAh non-removable battery. It runs MIUI 7 though Xiaomi has not revealed the Android version on the Redmi 3.

On the camera front, the Redmi 3 sports a 13-megapixel rear camera with LED flash, f/ 2.0 aperture, PDAF autofocus, and also supports 1080p full-HD video recording. There is a 5-megapixel front-facing camera as well which also supports full-HD recording. The dual-SIM Redmi 3 comes with hybrid dual-SIM slot that support one Micro-SIM and other Nano-SIM alongside microSD card.

For connectivity, the Redmi 3 comes with 4G LTE connectivity, with support for LTE bands in India. Other options include Bluetooth, GPS, A-GPS, Glonass, GPRS/ EDGE, Micro-USB, and Wi-Fi 802.11 b/g/n.