March 4, 2016 Comments Off on Apple, FBI Stake Out Conflicting Positions Before Congress 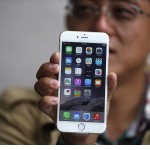 The US government calls it a “vicious guard dog” that hurts national security. Apple says it’s critical to protecting consumer privacy against increasingly sophisticated hackers. As the debate over built-in iPhone encryption has deadlocked in the courts, law enforcement and the world’s second-largest cellphone maker agreed on one point Tuesday: It’s now up to Congress to set boundaries in a ... END_OF_DOCUMENT_TOKEN_TO_BE_REPLACED