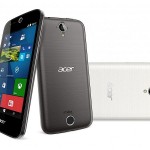 Acer introduced its Liquid M330 smartphone back in September last year during the IFA 2015 conference. The Windows 10 Mobile-based smartphone was launched with seven different handsets at the conference. The company after almost half a year has finally launched the Liquid M330 at $99.99 (roughly Rs. 6,650). It will be available from Microsoft store in the US this month. ... END_OF_DOCUMENT_TOKEN_TO_BE_REPLACED