March 9, 2016 Comments Off on The Monk Who Inspired Steve Jobs, Influenced Apple’s Designs 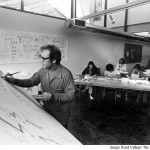 Robert Palladino’s name appears nowhere in Steve Jobs’s lengthy authorized biography, but he had an enduring influence on Jobs and the business empire he erected. Jobs sat in on Palladino’s calligraphy class at Portland’s Reed College, which eventually inspired the elegance for which Apple computers are renowned, the tech icon recalled in his famous 2005 commencement address at Stanford University. ... END_OF_DOCUMENT_TOKEN_TO_BE_REPLACED