April 4, 2016 Comments Off on Samsung May Unveil Foldable Smartphone-cum-Tablet Next Year: Report 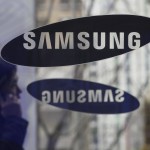 South Korean smartphone maker Samsung may unveil a game-changer device next year which can be a 5-inch smartphone when folded and turn into a 7-inch tablet when opened, a media report said. A prototype of foldable display is finished with development and the company is hoping to mass-produce the device starting from second half of this year, Korean news site ... END_OF_DOCUMENT_TOKEN_TO_BE_REPLACED