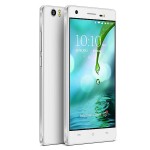 Lava’s new V2s smartphone has gone on sale via third-party online retailers in India. Priced at Rs. 7,899, the Lava V2s is yet to be officially revealed by the domestic handset maker. The Lava V2s sports an 8-megapixel front camera with LED flash which is a highlight of the smartphone at this price point. The smartphone also packs an 8-megapixel ... END_OF_DOCUMENT_TOKEN_TO_BE_REPLACED