February 16, 2018 Comments Off on Ebola virus can infect reproductive organs of humans 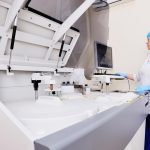 Ebola virus can infect reproductive organs of humans, according to a study conducted on macaques. Prior studies of survivors of the 2014-2016 Ebola outbreak in West Africa have revealed sexual transmission of Ebola virus, and that viral RNA (Ebola virus genetic material) can persist in semen following recovery. While little is known about viral persistence in female reproductive tissues, pregnant ... END_OF_DOCUMENT_TOKEN_TO_BE_REPLACED