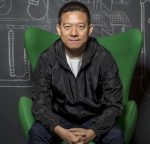 The CEO of Chinese internet firm LeEco has told employees the company grew too quickly and is short of cash, according to a letter seen by Bloomberg News, weeks after it announced its US expansion. Billionaire Jia Yueting said his 12-year-old video-streaming company, which recently bulldozed into sectors as wide-ranging as self-driving cars, sports, smart phones, film making, and ... END_OF_DOCUMENT_TOKEN_TO_BE_REPLACED