WhatsApp Now Supports Up to 256 Users in Group Chat 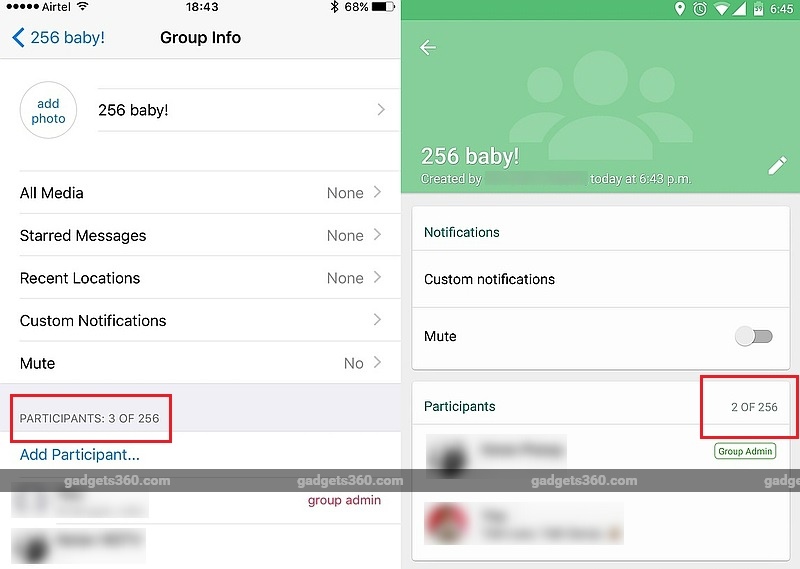 It appears Facebook-owned WhatsApp has silently pushed a server-side update to its app on Android that increases the number of users included in a group chat. Until now, a WhatsApp group chat could include up to 100 users. However, the update now pushes the limit to 256 users. iOS users have also received an update that brings the same functionality, with version 2.12.13 of the app.

For Android, the expanded group limit is visible on v2.12.367 and above. Those Android users who do not see the update yet can download the latest version (v2.12.437) from the application from the company’s website. It is worth mentioning that the new group limit is only visible on Android and iOS for now. However, it should reach Windows Phone, BlackBerry, and other platforms soon.

WhatsApp last month got rid of its $1 (approximately Rs. 68) annual subscription fee. Until now,WhatsApp asked some users to pay an annual fee for using the app after the first year of use – though as many of us experienced, most users were not asked to pay after a year, and instead were given extensions each year.

Apart from scrapping the annual fee, WhatsApp also revealed its upcoming plans where it wants people to connect with businesses and organisation directly.

It has been reported that WhatsApp could soon introduce a feature to allow its users to integrate their Facebook account with the instant messaging and voice calling app. The version 2.12.413 of WhatsApp for Android reveals company’s intention to allow users to link the messaging service with their respective Facebook account.

[“source-gadgets.ndtv”]
Up to 256 Users in Group Chat WhatsApp Now Supports 2016-02-05
srijita
to in With for and of on India The Launched at Samsung Launch A iPhone Android Galaxy More Apple Rs New Be 7 Price Google