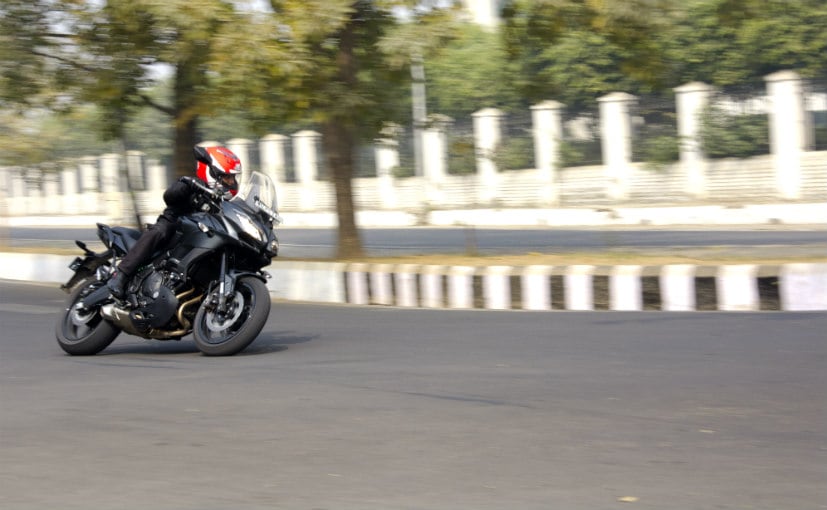 The new Kawasaki Versys 650 is finally here – a bike many enthusiasts have been waiting for. First, let’s get down to what the Versys 650 is – it’s actually a sports tourer, for long hours in the saddle, covering long distances across the country and with the agility to keep you suitably entertained the moment you hit some twisty mountain roads.

The name Versys is actually derived from two words – ‘versatile’ and ‘system’ – and the engineers at Kawasaki have certainly done justice to the bike’s name. It’s a motorcycle with multiple traits – easy to use for the daily commute, for the weekend breakfast ride (if you’re so inclined), or even longer excursions to the nearest hills or the annual expedition covering large distances across the country. 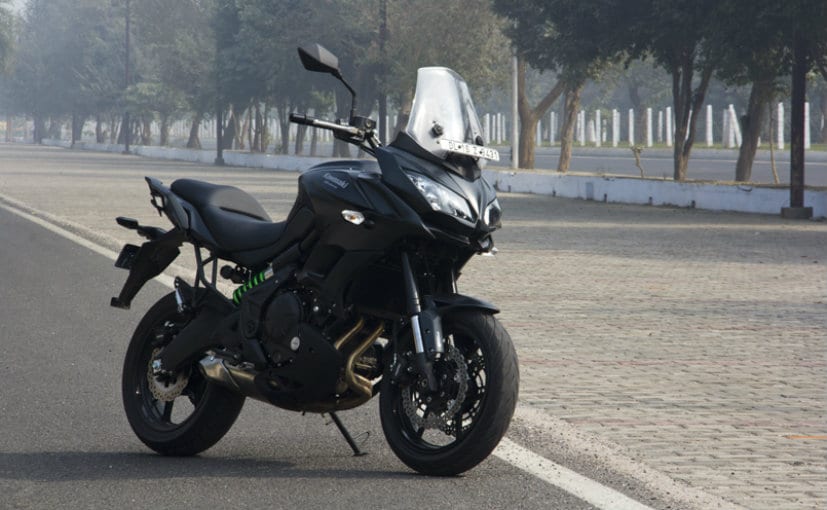 Aesthetically, the Kawasaki Versys 650 looks more or less similar to its elder sibling – the Versys 1000, with its tall stance that seems to murmur ‘touring’ instantly. Kawasaki says the Versys looks not only sporty, with distinctive Kawasaki identity, but its design is also functional – offering a balance of style, wind protection, aerodynamics and airflow management. Although offered in several colours and variants, including a ‘Light Touring’ variant abroad, in India, the Versys 650 will only be available in one ABS variant and one colour – the metallic black shade on the bike we are riding.

The front section is dominated by the twin headlamps mounted on the fairing with a large adjustable windshield. The meters are simple and easy to read, but a gear position indicator is missed. The seat is flat and wide with ample support for a pillion rider. So, rest assured there won’t be so many complaints from the significant other or the need to take frequent breaks when you set out on a two-up adventure on the Versys 650. Yes, the pillion seat actually is quite comfortable. 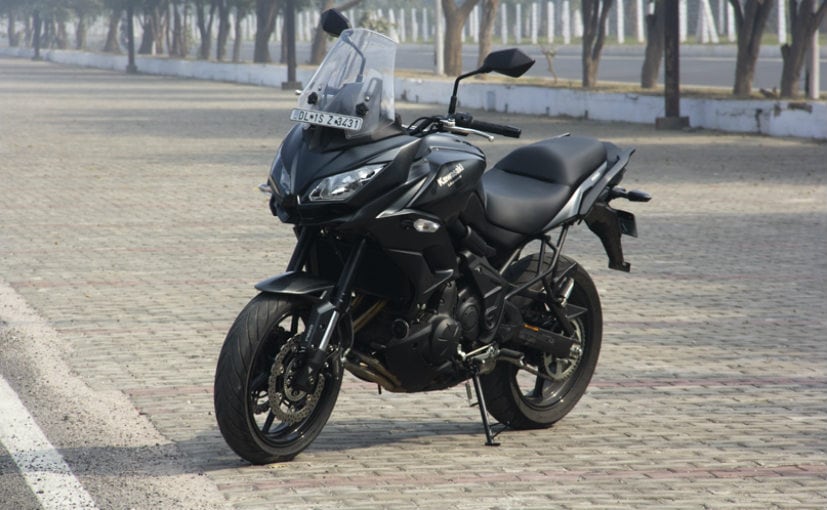 Swing a leg over the saddle and you realise that it’s quite a tall bike. The seat height (at 840mm) may feel a little daunting, especially for riders of short stature, but once you are perched on it, it feels cushy and comfortable. The pillion is still higher, so you have to step on the rear footpeg first to mount that tall pillion seat. The kerb weight is 216kg, so the Versys isn’t exactly what you’d call a ‘light’ motorcycle. What you immediately notice are the friendly ergonomics – you sit upright, the handlebar is wide and the position of the footpegs is neutral – not set too far back, and not too far forward.

Thumb the starter and the 649cc parallel-twin comes to life with a welcoming, nice burble. Slot it into first and release the clutch and you are immediately impressed by the smooth and responsive throttle response, thanks partly to the digital fuel injection. The six-speed gearbox isn’t exactly slick, the shifts settling in with a ‘thunk’, but the gearshifts are precise, without us ever encountering any misses or false neutrals.

The engine makes 68bhp of power at 8,500rpm and peak torque of 64Nm at 7,000rpm. The figures may not be worth swooning over, but what is important here is that the Versys 650 has a usable power band, the power kicks in quite low in the rev range and is spread out over a wide band, offering a rush of acceleration when you open the throttle. 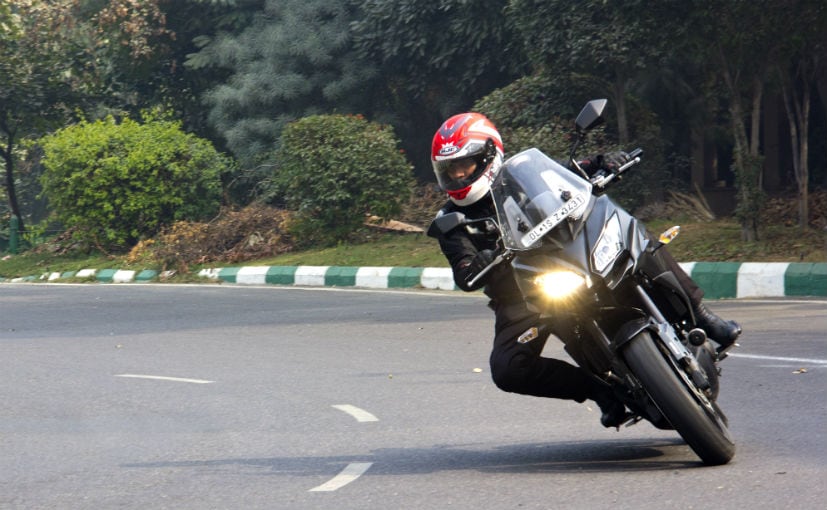 In fact, the Versys 650 feels quite quick and powerful, accelerating through the gears. If you’re over enthusiastic on the throttle, second gear is good enough to lift off tarmac and salute the skies, so a word of caution is advised. The mid-range is what impressed us the most – as is the throttle response. There’s enough juice to hit triple digit speeds before you realise you still have a couple of shifts left to hit sixth.

There’s no surge of acceleration at the top of the rev range, but you wouldn’t need to be wringing the throttle wide open anyway, there’s plenty of torque and power kicking in at lower revs and that’s what makes the Versys 650 a joy to ride within the city and in traffic. Lively acceleration, relaxed cruising speeds and a windshield that’s quite effective in keeping the windblast at bay is all you need to cover kilometre after kilometre and hours on hours on the road. 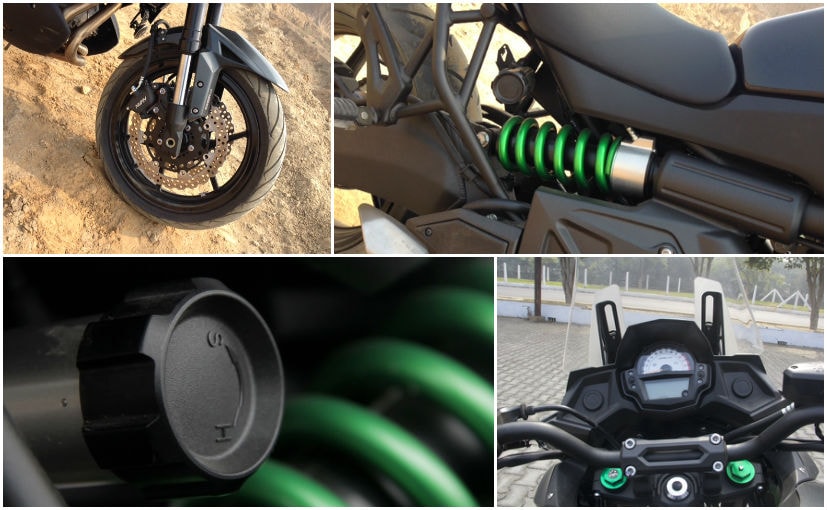 At 216kg, the Versys 650 isn’t exactly light, but the steering is neutral and it feels quite effortless once on the move. The chassis is brilliant and what shines is the exceptional suspension set up. The ride is plush, yet taut enough to glide effortlessly over broken road, potholes, speedbreakers and the like.

The long-travel 41mm front fork is a high quality Showa unit, with separate functions for each tube, with adjusters at the top of the fork for easy adjustment. Combining both long travel and stiff springs, you can adjust both ride height and rebound damping (if needed) for riding in different conditions.

The rear suspension is an offset monoshock and it works well too. What’s unique is that it comes with an easy remote preload adjuster, so if you need to carry a pillion and/or luggage, you can quickly adjust the settings without needing any tools. The default setup works great though and we didn’t need to tweak any settings over the different road conditions we rode the bike over. 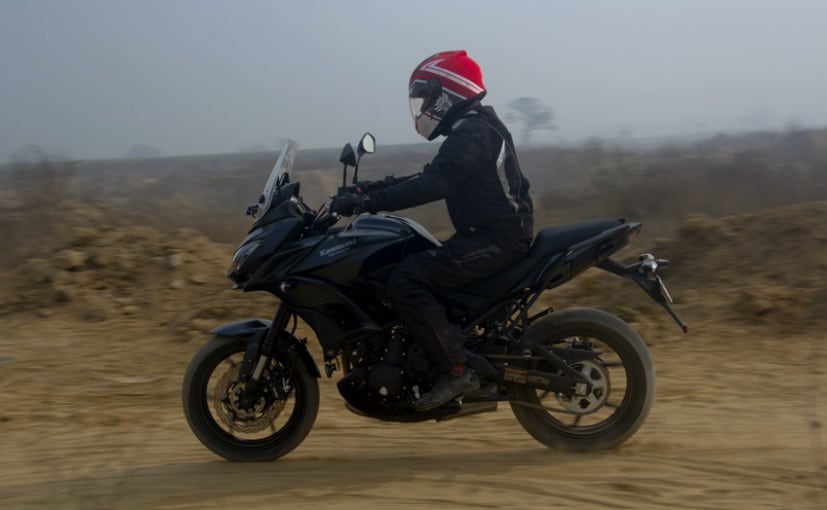 Although marketed as a dual-sport machine, the alloy wheels and street-oriented tyres of the Versys 650 do have some limitations, at least when it comes to hard-core off-road riding. But that’s something the average rider will seldom be doing. But it’s got 170mm ground clearance and the bit of off-road conditions we threw at the bike, the Versys 650 came out trumps, even with street tyres. Of course, replacing the stock tyres with dual sport rubber would certainly make the Versys 650 a lot more capable when the tarmac ends. 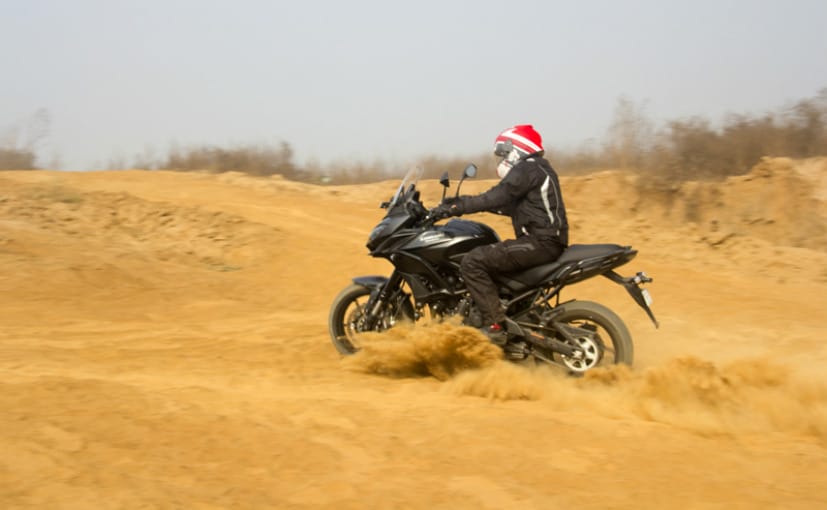 Handling is superb and despite the tallish stance of the bike, it gives you the confidence of a sport bike, urging you to push farther, tighter into corners. It’s an eye opener really, how brilliantly this bike handles on tarmac. Braking is top notch too and the inclusion of ABS (missing on both the ER-6n and the Ninja 650 – which share the same engine), offers sure-shot and confident braking, shedding speeds with ease.

The Kawasaki Versys 650 is a great bike to ride around the city – riding in traffic isn’t much of a wrestle, considering the bike looks quite tall and imposing. The seat height is not too tall for the average Indian and you get very good visibility in traffic. It’s quite nimble to handle and is actually quite a fun bike from stop light to stop light. 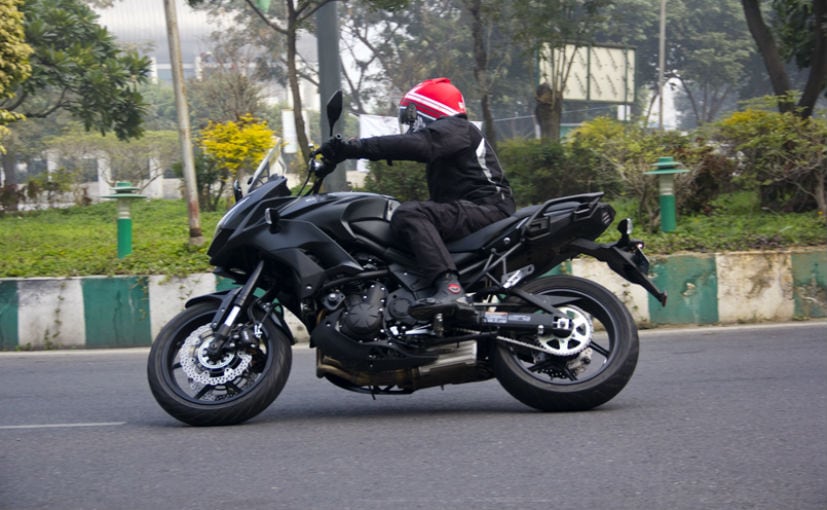 Then, of course, you can very comfortably tour on this bike – go on those long, long rides across different cities, different states, and yeah, across the country too. And while you’re at it, the Versys 650 can quite easily take on rough terrain – so Ladakh, Spiti, shouldn’t be a problem at all. But we’d definitely recommend some dual sport tyres for some added traction, if you’re going to be venturing out to where tarmac is rare. 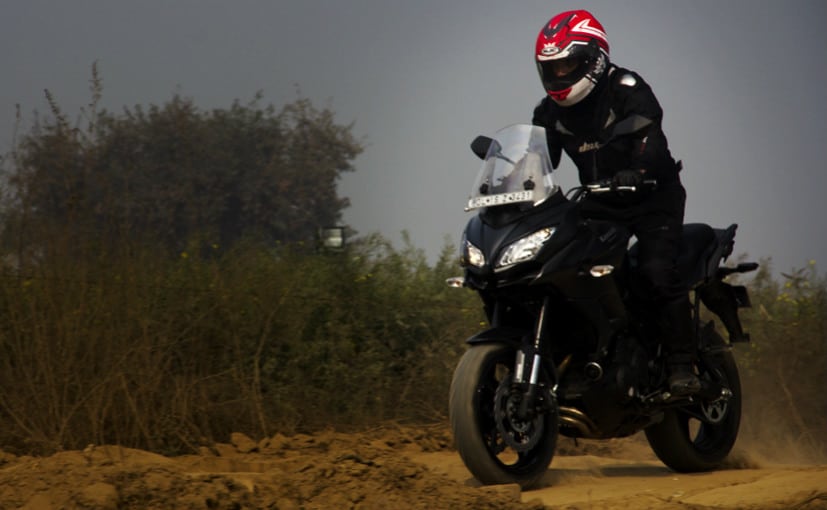 The Versys 650 could very well be all the bike you need – for your daily commute, for the weekend ride, and even for the long haul with your significant other as pillion with luggage. At 7.3 lakh (on-road Delhi), you can look at the Benelli 600 GT and even the Honda CBR 650F as options. And of course, there’s the Triumph Tiger 800, but that’s quite a few lakhs more expensive. Overall, the Versys 650 is a fantastic motorcycle and we think it’s worth all the money you will pay for.

[“source-auto.ndtv”]
2016 650 Kawasaki Review Versys 2016-02-18
srijita
to in With for and of on India The Launched at Samsung Launch A iPhone Android Galaxy More Apple Rs New Be 7 Price Google