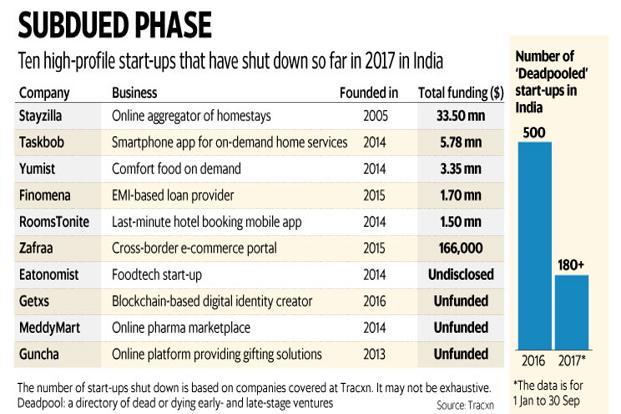 Bengaluru: While the number of start-up launches has declined sharply in the first nine months of the year, the severe slowdown in entrepreneurial activity has resulted in another phenomenon that highlights the risk-averse sentiment that is sweeping through India’s internet and technology start-up ecosystem: fewer start-ups are shutting down.

According to start-up data tracker Tracxn’s so-called “Deadpool” list—a directory of dead or dying early- and late-stage ventures—the number of start-up shutdowns is on track to be much lower than last year. So far in the first nine months of the year, a little over 180 start-ups have gone belly up, compared with the 500-odd ventures that wound up in 2016.

Secondly, the past 18 months have also witnessed an unusually high number of distress sales, as top investors in India’s start-up ecosystem have fought hard to recoup part of their investments—a clear case in point being Snapdeal, which earlier this year decided to continue as an independent venture after talks to sell itself to Flipkart fell through.

While a decline in the number of closures is technically good news for the broader ecosystem, it is symptomatic of some large issues—firstly, it signifies that entrepreneurs have become more averse to risk.

And, secondly, the slowdown in the growth of the consumer internet business in India has spooked investors, who have been forced to be more cautious about backing early-stage ventures and are writing far fewer cheques.

“If you look at the volume (of start-ups launching and subsequently shutting down) and compare it to what we saw back in 2015, it has definitely come down. In 2015, those volumes had hit a peak. What’s happened is pretty obvious—there was a lot of easy funding that was available back in 2014-15, and it encouraged a lot of entrepreneurs to start up and launch their own ventures. But now that funding has dried up relatively, a lot of those entrepreneurs—especially the ones who were thinking short-term and looking at quick, big-bang exits within a year or two of launch—have been forced to reconsider whether to start up or not,” said Rahul Chowdhri, a partner at Stellaris Venture Partners, a venture capital (VC) firm.

“And that’s not a bad thing—what has happened, now that the quality of entrepreneurs and start-ups has improved a lot, (is that) you see founders being more mature about their approach and investors are also only backing ventures with solid business models,” added Chowdhri.

Earlier in October, Mint reported that the number of internet and technology start-ups launched in the first nine months of this year had slumped to 800 from more than 6,000 in all of last year, as start-up closures, the struggles of large internet firms such as Snapdeal and a slowdown in the growth of e-commerce market took their toll on entrepreneurial activity.

The slowdown in start-up launches and start-up shutdowns is also partly cyclical.

“These things often happen in waves and cycles. Am pretty sure we will see a rebound and a resurgence in entrepreneurial activity again in the near future,” said Chowdhri.

While the total amount of funding in Indian start-ups has gone up significantly this year, the number of deals has actually witnessed a sharp decline.

Start-ups have raised roughly $8 billion in the first nine months of the year, compared with $4.6 billion in all of 2016, according to Tracxn.

“The fact that fewer companies are shutting down is clearly symptomatic of the fact that the funding environment is not what it used to be back in 2014-15, and it has forced investors to take a much more cautious stand, which, in turn, has led to fewer start-ups launching and shutting down,” said a partner at another India-based VC firm, requesting anonymity.