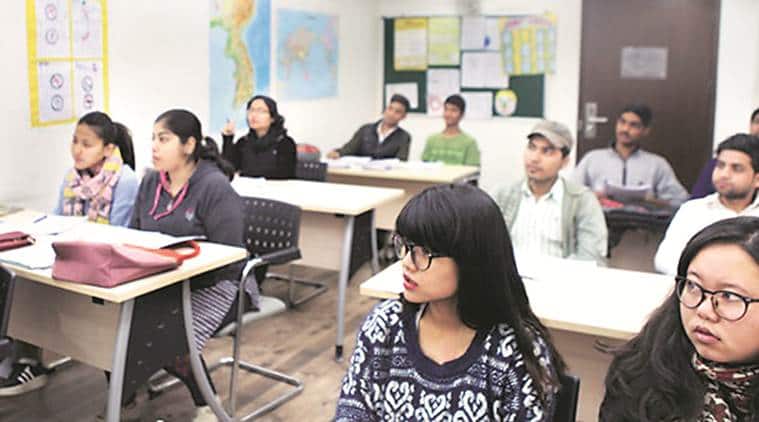 A vibrant South Korean economy and a concomitant promise of jobs, the call of South Korean universities and Hallyu, the Korean cultural wave, have fuelled the popularity of Korean language courses in the capital.

When King Sejong Institute, the language institute in the Korean Cultural Centre (KCC), Delhi, began in 2013, it had 60 students. In 2018, the institute had admitted over 1,000 across three semesters.

Even more significant is the trend of Indians registering for the Test of Proficiency in Korean (TOPIK), which is administered by the South Korean Ministry of Education and is required for non-native speakers seeking entrance in Korean universities, employment in South Korea, and the Korean Government Scholarship Programme.

There were 580 registrations in 2016; 668 in 2017; and 904 in 2018. The test is held twice a year in four centres — Delhi, Imphal, Ranchi and Chennai. According to Mi-ra Kwak, education manager at the KCC, an overwhelming number of registrations are at the Delhi centre.

Dr Mukesh Ranjan, project director of the Korean language programme at Jamia Millia Islamia, said the popularity of such programmes is linked to the promise of job opportunities and access to Korean universities.

“South Korea is emerging as a major player in the global economy. There are several Korean MNCs like Samsung, Hyundai and LG operating from India, and knowledge of the language contributes to growth trajectory within them. It also gives access to Korean universities such as Seoul National University, Yonsei University and Korean Advanced Institute of Science and Technology, which are distinguishing themselves in science and technology,” said Ranjan.

Many students at the Sejong Institute said that the Korean cultural blitz in the form of drama series, films and K-pop, which gained popularity in the city in the mid-2010s, was an entry point for interest in the language.

It was only once they pursued the language course to advanced levels that they realised they could also pursue career and education opportunities.

“I started listening to Korean music in mid-2016 and learning the language in 2017 because of my interest in the music. But now I would like to go to South Korea and study mass media and work there because their quality of production is so much better,” said 22-year-old Asmita Biswas.

The number of people pursuing Korean language in India is far fewer than in other Asian countries such as China, Vietnam and Philippines, according to Mi-ra Kwak.

“You could say this is the beginning of an interest in Korean studies here, and there has definitely been a large increase since mid-2010s,” she said.

Many of the advanced students who want to work as interpreters and translators are also aware of the novelty of their skill.

“By choosing Korean, I was making my own stepping stone, unlike in other languages like French and German,” Seema Mahajan (34) said.