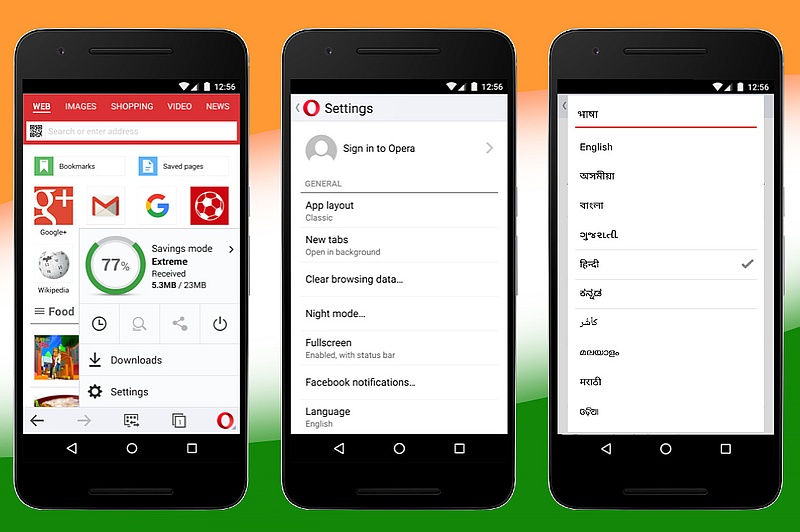 Opera Software on Tuesday rolled out the first update of 2016 for its first Opera Mini browser, adding new features and support for more languages.

Opera Mini v14.0.2 for Android adds support for more than 90 languages, including 13 Indian languages – Assamese, Bengali, Gujarati, Hindi, Kannada, Kashmiri, Malayalam, Marathi, Oriya, Punjabi, Tamil, Telugu, and Urdu. The app will show the most commonly used languages in their country in top of the language list inside the settings menu. In addition, users will be prompted to choose a language if they are using the updated browser for the first time.

“In India, more than 70% of the population does not use English as their primary language. The next generation of internet users will come from non-metro cities and they are most likely to be comfortable in engaging with the web in their regional languages,” said Sunil Kamath, Vice President – South Asia & South East Asia at Opera Software. “For realising the Digital India dream, localisation of content and the tools that deliver the web to end users is crucial. Opera web browsers have always supported reading content in multiple languages. We believe the addition of 13 Indian languages to Opera Mini’s UI will further help lower barriers for people to come online for the first time”.

Besides support for new languages, the Opera Mini app update also brings a new QR-code reader and generator. As per the company, the QR code scanning feature will give users quick access to Web content.

The Opera Mini for Android update brings an improved download manager as well. “We’ve done a lot of research on how to improve downloads in the browser, as we know it’s something many users care a lot about. We’ve made loads of improvements and tweaks lately to improve the stability and speed of downloads,” Christian Uribe, Product Manager for Opera Mini said.

Some of the other features included are in-app camera support for file upload and custom search engine per category. The updated app is available to download from Google Play.

[“source-gadgets.ndtv”]
Adds Support for 13 Indian Languages Improved Download Manager Opera Mini for Android 2016-01-29
srijita
to in With for and of on India The Launched at Samsung Launch A iPhone Android Galaxy More Apple Rs New Be 7 Price Google