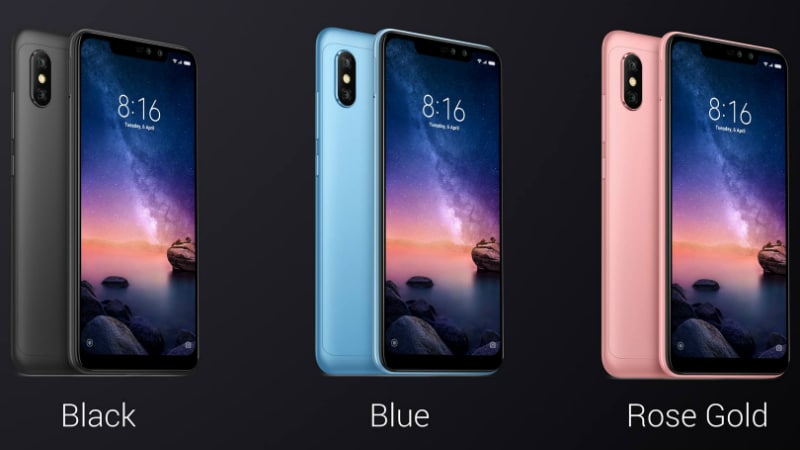 Xiaomi Redmi Note 6 Pro has become official, with the Chinese phone maker announcing the latest mid-range smartphone in Thailand. Successor to Redmi Note 5 Pro, the new Redmi Note 6 Pro comes with key upgrades such as dual selfie camera setup, a 19:9 display with a notch, upgraded rear camera sensors, a slightly bigger display, and AI-based features. However, the processor powering the Redmi Note 6 Pro – Snapdragon 636 – remains the same as that of the predecessor. Interestingly, Xiaomi seems to have made no official announcement around the Redmi Note 6 Pro in China or other major markets. The phone is also not yet listed on Xiaomi Thailand’s website, but can be found on the country’s official Mi forum. To recall, the smartphone is reportedly available in Dubai already, though there has been no official announcement around it yet in the UAE.

Xiaomi Redmi Note 6 Pro price is set at THB 6,990 (roughly Rs. 15,700) for the 4GB RAM/ 64GB storage configuration in Thailand, as revealed on Mi Forums and Facebook. Other variants of the smartphone have not yet been announced. The phone will be made available on Thailand-based e-commerce websites from September 27 to September 30 in Black, Blue, and Rose Gold colour options, with a free bundled Mi Selfie Stick or Mi Wi-Fi Repeater. There is no word on the Redmi Note 6 Pro price in India or release timeline yet.

The Xiaomi Redmi Note 6 Pro runs MIUI on top of Android, and sports a 6.26-inch full-HD+ IPS LCD full screen panel with a 19:9 aspect ratio, 86 percent screen-to-body ratio, and Corning Gorilla Glass protection. The handset is powered by a 14nm octa-core Qualcomm Snapdragon 636 SoC, coupled with an Adreno 509 GPU, 4GB of RAM, and 64GB of inbuilt storage. There could be other configurations as well, but they haven’t been revealed yet.