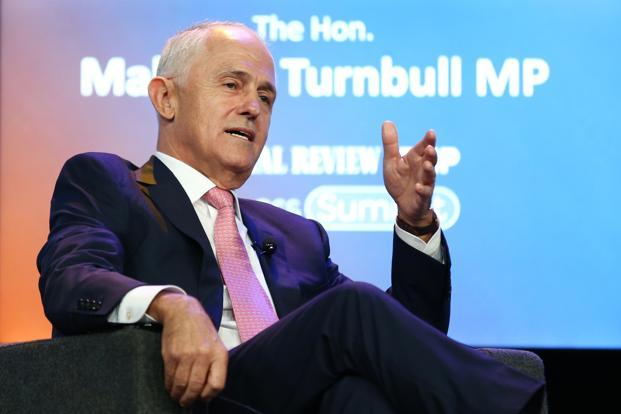 Speaking at a business forum in Sydney, Australian PM Malcolm Turnbull said: ‘This is a project that has gone through extensive environmental permitting both at the state level and federal level, mostly state.’ Photo: Bloomberg

Adani’s Carmichael mine and rail project in the untapped Galilee Basin has been held up by lack of financing and a barrage of legal challenges by green groups concerned about climate change.

Speaking at a business forum in Sydney, Turnbull said, “This is a project that has gone through extensive environmental permitting both at the state level and federal level, mostly state.” “All of those permitting has been done and it has taken a very long time…They (Adani) are entitled to develop it in accordance with those permits,” Turnbull said.

He accused opposition leader Bill Shorten of being two faced and lacking conviction over the Adani coal mine, warning that his approach posed an “enormous threat” to jobs. Turnbull said Shorten had shown he was prepared to overthrow the project for the sake of winning a by-election in inner city Melbourne, despite declaring support for the project in Queensland.

“And so when Bill Shorten goes up to Queensland and says ‘Oh, I am in favour of the mines’ and then goes down to Melbourne and says ‘I am against it’, you can see what a risk that is to jobs, to investment to the economic future and security of Australia, …it is completely two-faced,” Turnbull said.

Turnbull said Australia had high environmental standards and if a project has cleared those then it should go ahead. When asked if the project was financially viable, Turnbull said it was a matter for the company to decide.