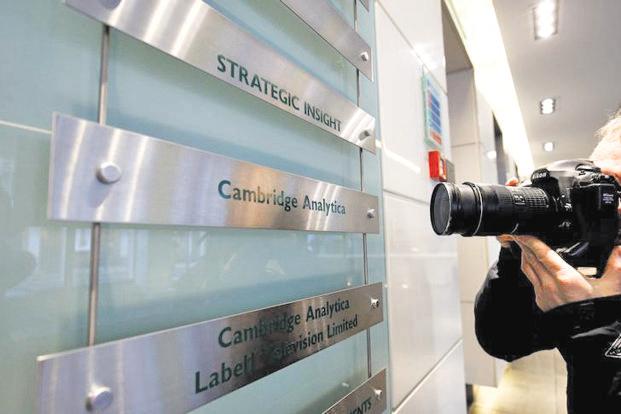 Currently, Cambridge Analytica in the UK is facing investigations by Parliament and government regulators into allegations that it performed illegal work on the ‘Brexit’ campaign. Photo: Reuters

New Delhi: Data drives all that we do”. That is how Cambridge Analytica, the analytics and marketing firm that worked for the Trump presidential campaign in 2016, describes itself on its website. Ironically, it is this very data that has brought the UK-based firm to the centre of controversy. The company allegedly used data harvested from about 50 million Facebook users to target US voters ahead of the presidential race. Details of Cambridge’s acquisition and use of Facebook data have been reported in several detailed accounts by the media, setting off a furious debate about the ethical implications of the firm’s so-called psychographic modelling techniques.

Specifically, Cambridge Analytica is accused of buying profile data of millions of Americans’ from researcher Aleksandr Kogan. Kogan, a psychology professor at the University of Cambridge collected user data from Facebook by telling them that he was collecting it strictly for academic purposes. Kogan thus gained access to data from not only Facebook users who agreed to give their information to Kogan’s app, but according to the Guardian, also got permission to harvest data on all their Facebook friends. 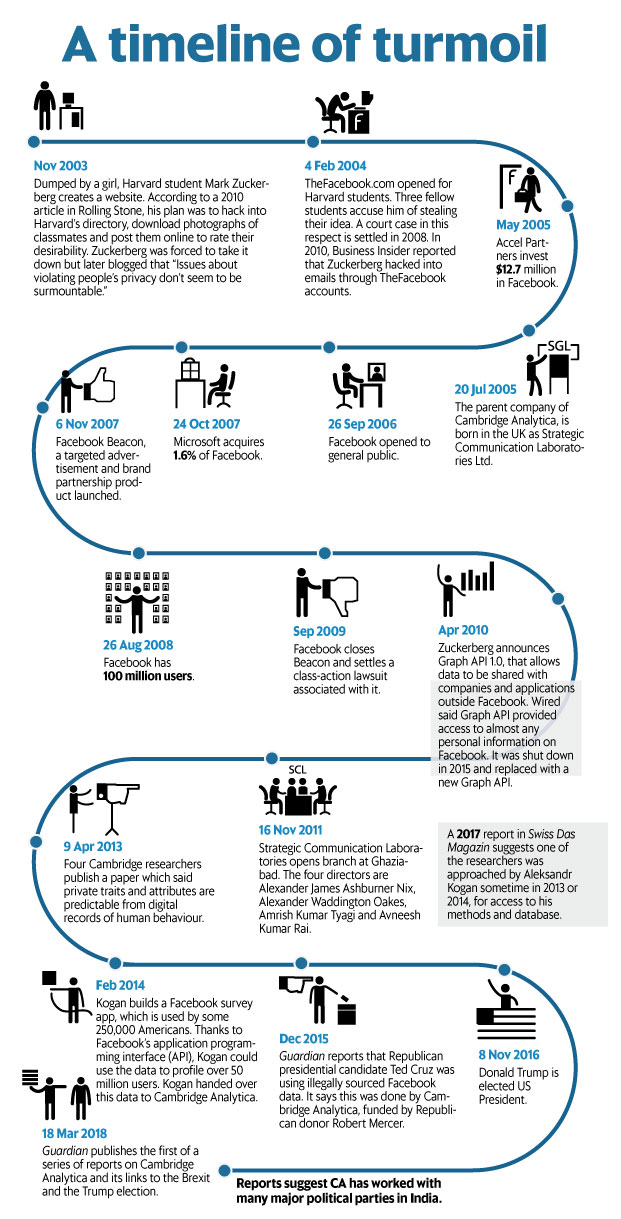 Here is everything we know so far about Cambridge Analytica:

Cambridge Analytica was set up in 2013 as an offshoot of parent company called Strategic Communication Laboratories (SCL Group), which offers similar services around the world. According to its website, SCL has influenced elections in Italy, Latvia, Ukraine, Albania, Romania, South Africa, Nigeria, Kenya, Mauritius, India, Indonesia, Thailand, Taiwan, Colombia, Antigua, St. Vincent & the Grenadines, St. Kitts & Nevis, and Trinidad & Tobago. According to reports in the Guardian, Cambridge Analytica’s founder and currently suspended CEO, Alexander Nix said it had been set up “to address the vacuum in the US Republican political market” that became evident when Mitt Romney was defeated in the 2012 presidential election.

The company is part of the SCL Group that provides data, analytics and strategy to governments and military organizations worldwide. Nix, the 42-year-old Eton-educated protagonist joined SCL in 2003 after studying at Manchester University and working in corporate finance.

Nix set up Cambridge Analytica, an offshoot in 2013, with funding from Republican donor Robert Mercer. The managing director of Cambridge Analytica’s political division is Mark Turnbull, who spent 18 years at the communications firm Bell Pottinger before joining SCL.

What exactly does Cambridge Analytica do? A blog post on Medium by Frederike Kaltheuner explains that the company does more than simply predicting users’ interests or future behaviour—it builds psychometric profiles. Psychometrics is a field of psychology that is devoted to measuring personality traits, aptitudes, and abilities. Inferring psychometric profiles means learning information about an individual that previously could only be learned through the results of specifically designed tests and questionnaires: how neurotic you are, how open you are to new experiences or whether you are contentious. And so on.

This sinister ability relies on mountains of data that the company, through Kogan, gathered between 2013 and 2015. Few users, as mentioned before, were aware they were being profiled in this way.

Using a personality profiling methodology, the company—formed by high-powered right-wing investors for just this purpose—began offering its profiling system to dozens of political campaigns.

Cambridge Analytica was able to procure this data in the first place thanks to a loophole in Facebook’s API, since closed, that allowed third-party developers to collect data not only from users of their apps but from all of the people in those users’ friends network on Facebook. This access came with the stipulation that such data couldn’t be marketed or sold—a rule Cambridge Analytica promptly violated.

What is more worrying is that the company tends to describe its capabilities in grandiose language, touting its expertise at “psychological warfare” and “influence operations.” It has long claimed that its sophisticated understanding of human psychology helps it target and persuade people of its clients’ preferred message.

Meanwhile, Channel 4 News in the UK posted a video in which Cambridge Analytica CEO Nix is seen talking about entrapment as a way to win campaigns. Channel 4’s videos include a series of meetings at London hotels over four months between November 2017 and January 2018. The videos at times include Nix as well as Turnbull, managing director of Cambridge Analytica political global, and Alex Tayler, chief data officer. As these reports surfaced, the company board suspended Nix, pending an investigation.

Currently, Cambridge Analytica in the UK is facing investigations by Parliament and government regulators into allegations that it performed illegal work on the “Brexit” campaign.

Interestingly, Cambridge Analytica and SCL’s impact was not just limited to the US and Britain. It is believed that Cambridge Analytica was involved in past Indian elections, and has made efforts to reach out to both the Bharatiya Janata Party (BJP) and the Congress, ahead of the 2019 general elections. Here is a detailed piece on SCL’s activities in India.

All the scrutiny appears to have damaged Cambridge Analytica’s political business. No American campaigns or “super PACs” have yet reported paying the company for work in the 2018 midterms, and it is unclear whether it will be asked to join Trump’s re-election campaign.

In the meantime, Nix is seeking to take psychographics to the world of advertising. He has repositioned himself as a guru for the digital ad age—a “Math Man,” he puts it.

People who have worked closely with Nix, said it is his desire to push boundaries that has backfired. One of these people said: “He managed to take the opportunity of a lifetime for his company . . . and his hubris and arrogance, wanting people to think of him as a secret agent, managed to destroy it all”.