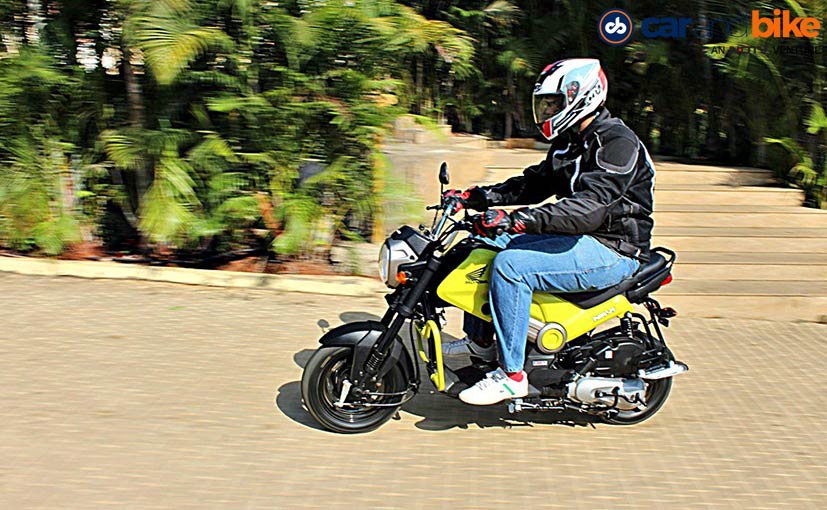 Our first ride review of the Honda Navi today will not include words – Large, handsome and masculine.Honda Motorcycle & Scooter India’s self-developed and by far its boldest ever creation, the Navi turned out to be the big surprise at the 2016 Auto Expo and after waiting patiently, we were finally asked to ride HMSI’s little moto-scooter at an amusement park, quite refreshing from the usual test locations. Petite in looks and easily the opposite of every conventional on sale in the country, I was given the task to sample this wonder and having spent a day with this ‘funtastic’ (as the folks at Honda choose to call it) two-wheeler, here are our first impressions of the Navi. A shrunken motorcycle was the general consensus when the Honda Navi was first unveiled at the expo. Looking closer today, the design has substance and gets a lot of young elements that we have grown to like. That said, the Navi is built to a cost and that does feel apparent when you see certain bits. The bike is based on the Activa and has similar dimensions as the popular scooter. The handlebar though sits taller and is the only chrome and sour looking bit on the otherwise youth centric offering. There are also a host of components that feel a bit too gimmicky like the fuel tank cover, but does the job of adding a sporty element to the styling. 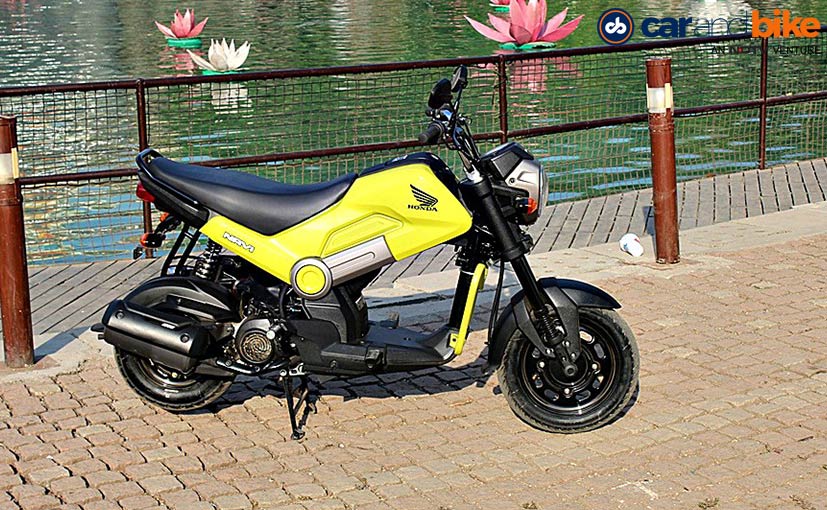 What also works for us is the bold headlight that stands out with the silver finished plastic cladding. It really brings out the motorcycle element on the moto-scooter, without going overboard. Given the novelty the headlight brings in alone, you tend to forgive that Honda has gone to its existing parts bin for several components with the tail light coming from the CBF Stunner. 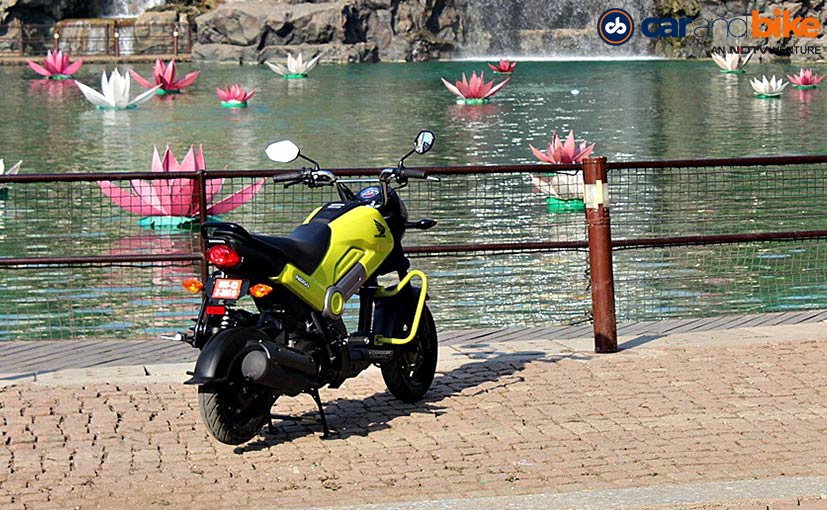 The Honda Navi has a slender profile, which means it will accommodate anyone and everyone. Its diminutive size also means, vertically challenged folks will find the bike immediately at home. What also works are the vibrant colours on the Navi with six options on offer. While Honda did show some wacky customization options at the expo, the ones currently on offer are quite subtle and come with interesting decals, interchangeable panels, crash quards, visor and an under body guard, all of which costs an extra 6000 over the asking price of the bike. 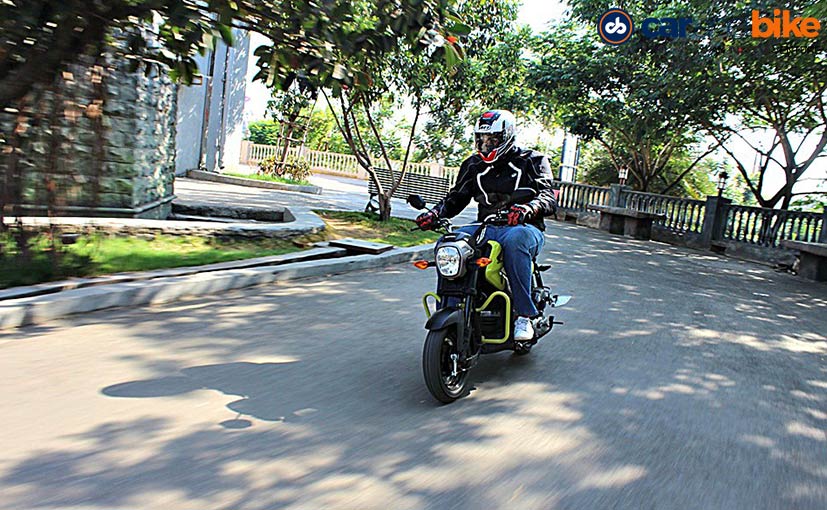 The Honda Navi uses the same 110cc single-cylinder, air-cooled motor that is paired to the same V-Matic automatic transmission from the Activa, but overall the engine’s character gets a subtle transformation on the Navi. The moto-scooter is a good 7 kg lighter than the Activa, which allows a much improved power-to-weight ratio. As a result, what you get is a more responsive mill that is quicker off the line, while continuing to be at its nimble best.

While we haven’t been able to hit the top whack on this motor, given the restricted lanes of the amusement park we were riding in, expect the 60kmph mark coming up faster on the Navi compared to other scooters. That said, high speed stability does remain a matter of concern. 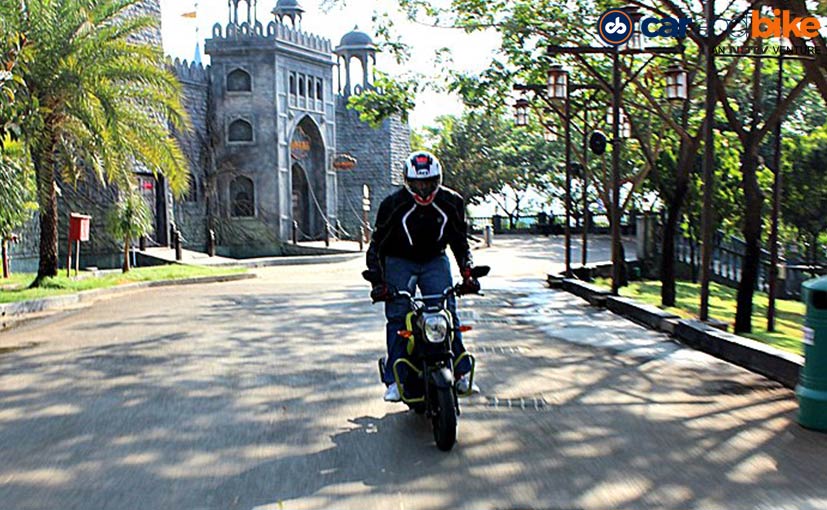 I have to admit, it was a pleasant surprise to see the Honda Navi accommodate me so well (I’m 6.2-feet). Given its puny proportions, I was uncertain if the bike will be able to do so, but that’s the fun part, looks can be deceptive and the Navi stands testimony to it. One sits upright and the raised handlebar fits right into your hands along with the centre set foot pegs, which are not retractable. Interestingly, tall riders will find the rear foot pegs accessible too, converting them to rear set foot pegs, like a sports bike. The motorcycle inspired design also helps in making the Navi a more corner friendly motorcycle, which works well with the super light handlebar. A bit too light actually, given the rear biased weight on the bike. This does mean that handling is nimble and popping a wheelie turns out to be easier than usual.

The Navi also comes with telescopic front forks borrowed from the Activa 125, while the rear sports a single shock absorber positioned on the right side similar to the Activa 110. While the scooter is known for its appreciable ride quality, the Navi surprisingly feels a tad unsettled, especially at high speeds. Larger bumps can be a matter of concern as the front tends to lose balance easily. 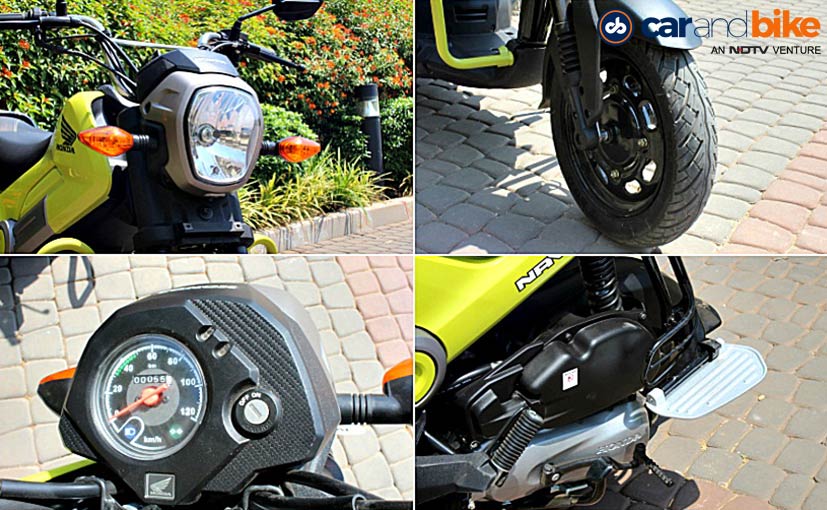 The Honda Navi gets 130mm drum brakes at the front and rear, and the brake units do their job up to the mark. Honda isn’t providing its famous Combi-Braking system on the Navi, given the built-to-cost nature of the bike, but the bigger 12-inch front and 10-inch rear wheels wrapped in MRF Nylogrip tyres offer appreciable grip and aid in providing the right stopping power. You also get a brake lock on the Navi. Good going Honda! 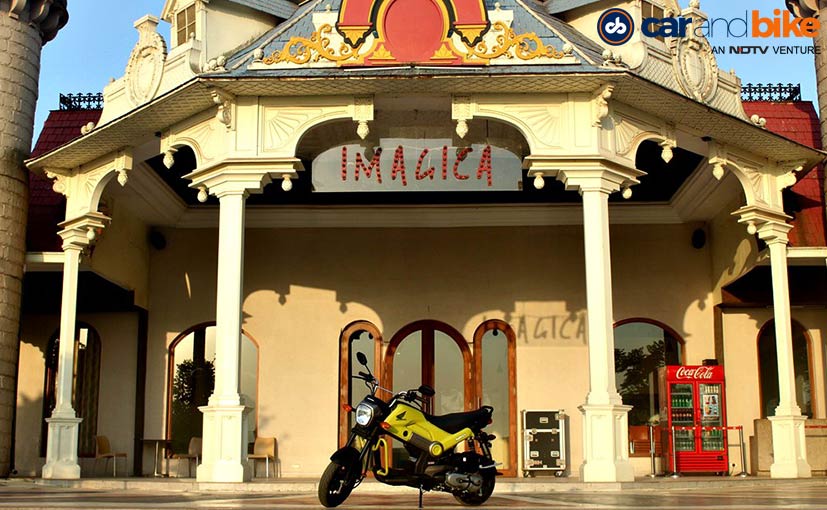 Honda Motorcycle & Scooter India posed a very important question before we set out to ride the Navi – the question is – would you call it a motorcycle or a scooter? After having spent some quality time with this creation, the Navi best emerges as a scooter rather than a motorcycle. Here is why. While its looks may be motorcycle inclined, it is a flared Activa at heart and that is a part, which should be appreciated.

Because when you start comparing it to even entry-level motorcycles on offer today, the Navi loses its novelty, charm and certainly the fun factor. However, you should call it a scooter (maybe even a moto-scooter, perhaps), which the customer perceives as a fun, city riding commuter and not a sub-standard motorcycle. This is the part that differentiates the Navi from its rivals and should be celebrated a lot more.
[“source-ndtv”]

First Honda NAVI: Review Ride 2016-04-14
srijita
to in With for and of on India The Launched at Samsung Launch A iPhone Android Galaxy More Apple Rs New Be 7 Price Google