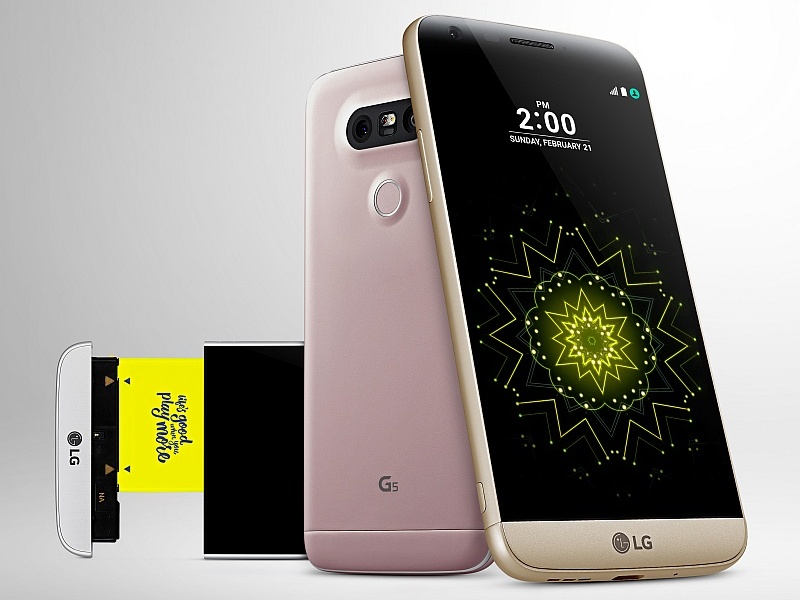 At the Mobile World Congress on Sunday, LG announced the launch of the LG G5, its latest flagship smartphone. The G5 sports metal body and packs in top-of-the-line specifications and a number of other interesting features such as expandable module which can be utilised to enhance the camera and battery of the phone.

Notably, LG did not detail the pricing and availability of the smartphone or its accessories at the event.

As for the specifications, the LG G5 sports a 5.3-inch QHD display (1440×2560 pixels) featuring always-on display technology. The always-on display will allow users to check time, notifications and battery status among other pieces of information. It is powered by Qualcomm Snapdragon 820 SoC coupled with 4GB of RAM and 32GB of inbuilt storage that can be expanded using a microSD card.

On the photography front, the LG G5 has a 16-megapixel and 8-megapixel rear camera. One with a standard 78-degree lens and another with a 135-degree wide angle lens, the widest available in any smartphone. As per LG, the wide angle lens makes it easier for users to capture more landscape, taller buildings or larger groups without having to position oneself further from the subject. On the front side, there’s an 8-megapixel camera. Other features of the LG G5 include a 2800mAh battery with Quick Charge 3.0.

The South Korean technology conglomerate announced two modules for the LG G5. The Cam Plus can be attached to the G5 through the battery slot, and offer “comfortable grip and convenient control of a DSLR.” The company says that the LG Cam Plus will enhance the camera experience by offering auto focus, exposure lock, and give them a physical button for power, shutter and other photography features.

The module also adds 1200mAh battery to the phone. The Hi-Fi Plus with B&O Play module, on the other hand, enhances the audio experience on the LG G5. It supports 32-bit, and 384KHz high-definition audio playback.

The Hi-Fi Plus with B&O Play, the company says can also be used either as a module with the LG G5, or as a separate Hi-Fi DAC when connecting to a smartphone or PC.

Also unveiled was the LG 360 Cam, a compact 360-degree angle camera equipped with two 13-megapixel 200-degree wide angle cameras, 1200mAh battery and 4GB of inbuilt storage, which can be supplemented by a microSD card. Thanks to the partnership with Google, images taken with the LG 360 Cam can be uploaded to Google Street View and YouTube360, adding the fun of sharing creative contents with others.

The company also announced the LG 360 VR, its virtual reality headset that can only be used with the LG G5, and will be connected via a cable to the smartphone. Meant to simulate viewing a 130-inch TV from 2 metres away, the foldable 360 VR is compatible with 360-degree images and videos captured with LG 360 Cam as well as all Google Cardboard content.

The company also announced a number of companion devices that can be used with LG G5. In the meanwhile, the company unveiled the LG Rolling Bot, which resembles Star Wars’ BB8, is companion device that rolls like a ball and captures images and videos with its 8-megapixel camera.

LG at its pre-MWC 2016 event also announced the H3 by B&O PLAY, which is a set of high-end earphones that delivers high-quality 32-bit sound of the LG Hi-Fi Plus with B&O Play. It works with every LG smartphone model.

The LG Smart Controller allows users to control drones and other smart devices. The company says that it can be used to check the video stream from the drone through the LG G5 in real time.

Speaking at the launch, Juno Cho, President and CEO of LG Electronics Mobile Communications Company, said, “The new LG G5 will encourage owners to rediscover the true joy of a mobile life. The G5 and LG Friends are the result of many experts inside LG asking themselves if it was still possible to be innovative and unique in the smartphone space. I think once customers spend a little time with the LG G5, their answer will be a resounding yes.”

[“source-gadgets.ndtv”]
820 Add-Ons Cameras Dual G5 Launched LG Modular Rear Snapdragon With 2016-02-26
srijita
to in With for and of on India The Launched at Samsung Launch A iPhone Android Galaxy More Apple Rs New Be 7 Price Google