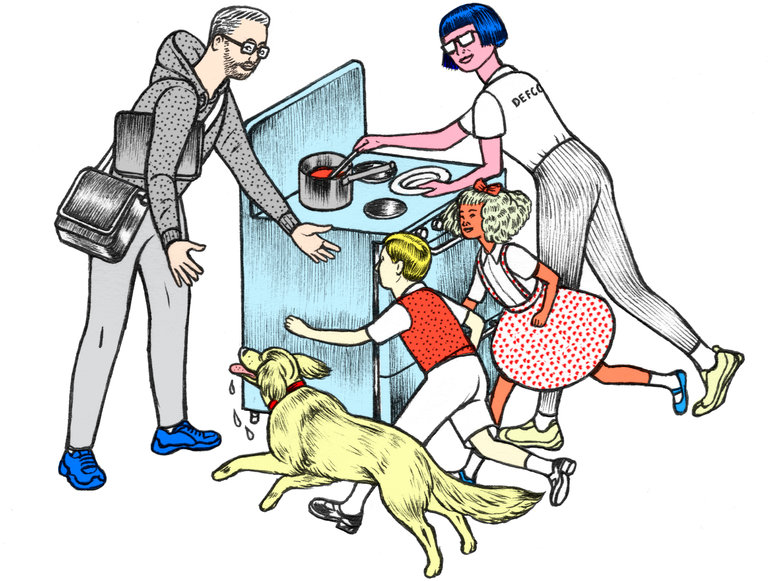 Millennials, generally defined as people born between 1982 and 2000, were supposed to be the generation that forged what has been called “a new national consensus” in favor of gender equality. Indeed, in February the prominent Columbia professor Jeffrey Sachs labeled the 2016 election, where an extremely qualified female candidate lost to a man with a history of disrespecting women, “a blip” on the road to the egalitarian society that will be achieved once millennial voters outnumber their conservative elders.

But the millennial category lumps together everybody from age 17 to 34, a group varied by race, ethnicity, religion, income, education and life experience. Don’t think for a second they are united. As a set of reports released Friday by the Council on Contemporary Families reveals, fewer of the youngest millennials, those aged 18 to 25, support egalitarian family arrangements than did the same age group 20 years earlier.

Using a survey that has monitored the attitudes of high school seniors for nearly 40 years, the sociologists Joanna Pepin and David Cotter find that the proportion of young people holding egalitarian views about gender relationships rose steadily from 1977 to the mid-1990s but has fallen since. In 1994, only 42 percent of high school seniors agreed that the best family was one where the man was the main income earner and the woman took care of the home. But in 2014, 58 percent of seniors said they preferred that arrangement. In 1994, fewer than 30 percent of high school seniors thought “the husband should make all the important decisions in the family.” By 2014, nearly 40 percent subscribed to that premise.

A different survey found a similar trend, in this case concentrated mainly among men. In 1994, 83 percent of young men rejected the superiority of the male-breadwinner family. By 2014 that had fallen to 55 percent. Women’s disagreement fell far less, from 85 percent in 1994 to 72 percent in 2014. Since 1994, young women’s confidence that employed women are just as good mothers as stay-at-home moms has continued to inch up, but young men’s has fallen. In fact, by 2014, men aged 18 to 25 were more traditional than their elders.

Such slippage in support for gender equality may have been a factor in the 2016 election, even though voters 18 to 30 were more likely than any other age group to vote for Hillary Clinton. An analysis of exit polls by Kei Kawashima-Ginsberg of Tufts University reveals that millennial support for a white woman in 2016 was 10 percentage points lower than their vote for a black man in 2008. Furthermore, the gender gap among young people was larger than in previous elections. While 63 percent of young women voted for Mrs. Clinton, only 47 percent of young men did so.

The political scientist Dan Cassino suggests that the increased support for male leadership in home life among 18- to 25-year-olds may reflect an attempt to compensate for men’s loss of dominance in the work world. Youths surveyed in 2014 grew up in the shadow of the financial crisis, which accelerated the longstanding erosion of men’s earning power. During the 2016 primaries, when Professor Cassino asked voters questions designed to remind them that many women now earn more than men, men became less likely to support Mrs. Clinton. Perhaps a segment of youth is reacting to financial setbacks suffered by their fathers. Indeed, a 2015 poll commissioned by MTV found that 27 percent of males aged 14 to 24 felt women’s gains had come at the expense of men.

It’s not just the youngest millennials who seem resistant to continuing the gender revolution. Overall, Americans aged 18 to 34 are less comfortable than their elders with the idea of women holding roles historically held by men. And millennial men are significantly more likely than Gen X or baby boomer men to say that society has already made all the changes needed to create equality in the workplace.

Are we facing a stall or even a turnaround in the movement toward gender equality? That’s a possibility, especially if we continue to pin our hopes on an evolutionary process of generational liberalization. But there is considerable evidence that the decline in support for “nontraditional” domestic arrangements stems from young people witnessing the difficulties experienced by parents in two-earner families. A recent study of 22 European and English-speaking countries found that American parents report the highest levels of unhappiness compared with non-parents, a difference the researchers found is “entirely explained” by the absence of policies supporting work-family balance.

No wonder some young people think that more traditional family arrangements might make life less stressful. Tellingly, support for gender equality has continued to rise among all age groups in Europe, where substantial public investments in affordable, high-quality child care and paid leave for fathers and mothers are the norm.

The availability of such options increasingly outweighs cultural support for traditional gender arrangements. When young Americans are asked about their family aspirations, large majorities choose equally shared breadwinning and child-rearing if the option of family-friendly work policies is mentioned.

Furthermore, the financial advantages of dual-earner couples over male-breadwinner families have increased significantly in recent years, and an unequal division of housework has become progressively more damaging to relationships. The minority of couples who do manage to divide chores and child-rearing equally report higher levels of marital and sexual satisfaction, and more frequent sex, than do men and women in homes where the wife does most of the housework and child care.

If, but only if, we can win such reforms, we may find that rather than growing out of youthful egalitarian idealism, as the popular view of aging might lead us to expect, more young Americans may grow into it, creating the most egalitarian family arrangements yet.

Do Men Millennial Stay-at-Home Want Wives? 2017-04-01
Loknath Das
to in With for and of on India The Launched at Samsung Launch A iPhone Android Galaxy More Apple Rs New Be 7 Price Google