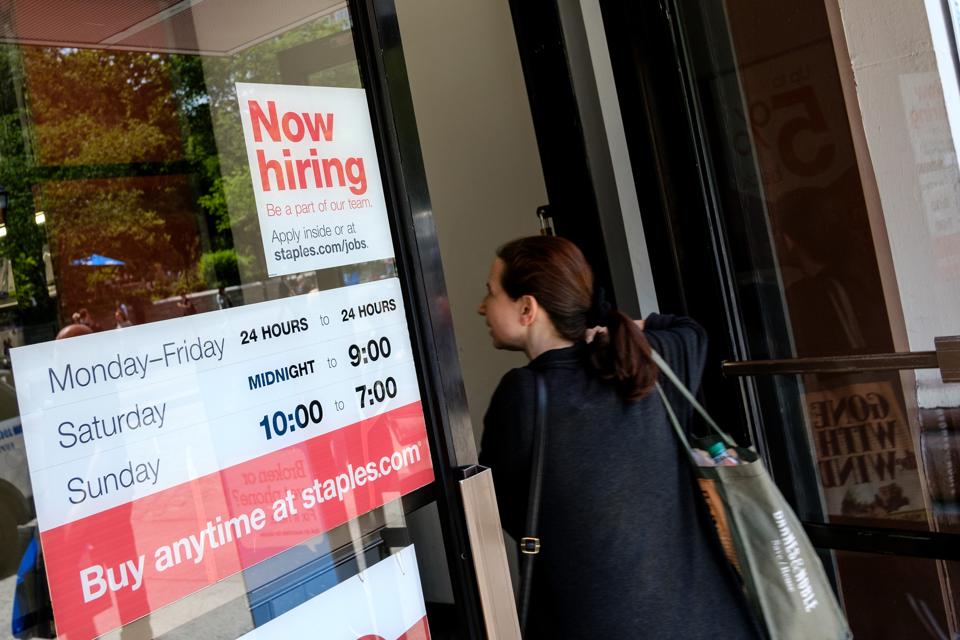 A ‘Now Hiring’ sign in front of a Staples store in New York City. U.S. unemployment has hit its lowest level since 2001 at 4.3 percent for May. (Photo by Drew Angerer/Getty Images)

At a recent media event touting the need for apprentice programs, Donald Trump and his daughter Ivanka pointed to the latest news from the U.S. Department of Labor: There are currently 6 million job openings in the United States.

The data come from the Job Openings and Labor Turnover Survey (JOLTS), which is released monthly. The survey reports an increase of 400,000 job openings at the end of April 2017 as compared to April 2016.

The job market is so strong that businesses and economists believe the inability to find workers is harming economic growth and could encourage companies to move operations. Zimmer Biomet, a maker of artificial orthopedic devices located in Warsaw, Indiana, cannot find sufficient workers for its factory. “It is struggling to find enough workers, despite offering some of the region’s best pay and benefits,” according to the Washington Post.

“The lack of laborers not only threatens to stunt the growth of these companies, experts warn, but it could also force them to decamp their home town in search of workers,” the Washington Post reports. “With the U.S. unemployment rate at a 16-year low of 4.3 percent, employers across the country are dealing with a dearth of potential hires. Economists say that talent shortages are growing constraints on the country’s economic expansion, especially as millions of baby boomers enter retirement.”

Here is an amazing statistic: 73 counties in the United States have “unemployment rates of 2 percent or lower,” according to the Bureau of Labor Statistics (BLS). At such low rates, or even somewhat higher, it means that anyone who wants and is able to work can find employment. The concept of “frictional” unemployment means individuals leaving jobs and others seeking new jobs is going to leave some level of unemployment above zero.

And this brings us to the debate over immigration. “The low unemployment rate, plus employers noting the dearth of available workers, indicates the desperate need for more workers across the skill spectrum,” Madeline Zavodny, a professor of economics at the University of North Florida, told me. “Continued economic growth requires more U.S. natives to enter the U.S. labor market and demonstrates the need for foreign-born workers.”

The main argument made by critics of immigration is that immigrants “take” jobs from Americans. Yet if immigrants harm the job prospects of U.S. workers why has the unemployment rate continued to fall year after year?

The reason is that when someone new enters the U.S. labor market, including immigrants, such individuals spend their earnings, which helps create more jobs. Immigrants (and natives) also create additional jobs by starting businesses, investing in businesses or encouraging companies to expand in response to increased consumer spending and the availability of workers to fill new positions.

The next time someone complains about immigrants taking away jobs from Americans, ask a simple question: If new people entering the labor force is so bad, then why do we celebrate at high school and college graduations?