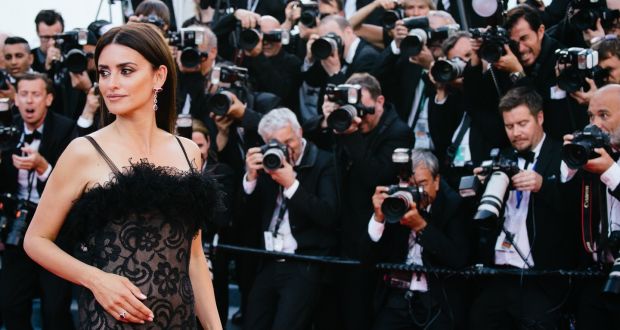 Following the news that Cannes was to stop advance press screenings and make the hacks watch the films at the same time as the red-carpet folk, there was much emollient argument to the effect that the difference would be negligible. The change has, however, had a notable effect on the press show for the opening film. The critics were surprised to note that, contrary to what we’d been led to believe, the press screening for Everybody Knows looked to be starting an hour before the official show. When we got there we discovered the ghastly truth.

We were forced to sit through a live relay of the opening ceremony before seeing the film. This was the most French thing I’ve seen since Raymond Blanc covered a piano accordion in béarnaise sauce while torturing a goose. Some fellow spoke a eulogy to the Festival and to Jean-Luc Godard while some other bloke tinkled a piano in the background.

Then each of the jury members was introduced in turn. They walked out, smiled at the audience and assembled at the back of the stage like judges in the much-mourned Gong Show. It ended with Juliette Armanet mouthing a version of Windmills of My Mind while everyone tried to look wistful. I take it back. This is why we’re here. Worth seeing once.

Certain conventions govern the wielding of the Cannes bag. The most important dictum states that it should not be used for at least two years. That would invite the speculation that this might be your first time here.

If you’re going to tote your stuff around in a Cannes bag then best go with that blue satchel from 2015 or, better still, some tattered relic from the Mitterand years.

It is, nonetheless, imperative to review the current bag with the focus you would bring to analysis of the latest epic from Andrey Zvyagintsev.

This year, Cannes has returned to the beach-style item that was such a hit in 2016 (I think. I can’t be bothered to check this.) That’s to say it is narrow at the top and wide along the vertical apex. This seems very suitable for a maritime event.

What you will actually carry in the bag (some years in the future, obviously) are scraps of paper with unreadable notes, phone cables without the plug attachments and invitations to events you’d rather die than attend. But it looks like the sort of thing in which you might carry flip flops, sun-cream and a tattered Wilbur Smith paperback.

That effect is heightened by the nice blue denim. We also like how faintly “Festival de Cannes” is pressed onto the front. There will be few “look I’ve been to Cannes opportunities” for you when you get home. Quite right too. What really pushes this year’s bag to the top of the charts is, however, the fact that it’s really two bags. It comes with a little denim pouch for change, fags, bullets or whatever you fancy. We’re sold.

Five stars: This is a bag among bags – The Irish Times.

Before Cannes even began, we found ourselves at the centre of a potential business troll of the highest order.

As even those who have not darkened a cinema in decades may be aware, Netflix and Cannes have, over the last year, been duking it out like Victor McLaglen and John Wayne in The Quiet Man.

Netflix, inhibited by France’s strict exhibition laws that prohibit any film streaming within three years of theatrical release, would not promise to put their films in cinemas and were thus banned from competition.

Netflix then refused to compromise and allow films to play out of competition either.

You know all this.

As press and business people arrived for the event, word got out that Netflix were interested in buying the opening film, Asghar Farhadi’s Everybody Knows. Were this to happen it could mean that the “banned” Netflix would end up with the most prominent film in the competition. This could only be seen as a massive victory for Ted Sarandos, Netflix’s chief content officer. A high-brow thriller with Javier Bardem and Penelope Cruz, Everybody Knows is just about within the streaming giant’s wheelhouse.

Hold your horses, The report in Variety is quite couched. “It’s still too early to know if Netflix will actually make an offer on Everybody Knows (or for what territories)” it read. “The film has distribution in France from Memento Films, where it will opens today. Insiders tell Variety that other distributors have expressed interest in buying US and global territories prior to the movie’s premiere on Tuesday night.”

Cate Blanchett, president of this year’s jury, has made it clear that she and her team will be offering female directors no special treatment. At a press conference on Tuesday, she offered a considered response to questions about hopes that we may this year see only the second ever Palme d’Or awarded to a female director. “Is it going to have a direct impact on the films in competition this year?” Blanchett said. “Not specifically. There are several women in competition. They are not there because of their gender, they are there because of the quality of their work. We will assess them as film-makers, as we should be.”

And today’s review from the festival…

Asghar Farhadi has made films that are a bit like thrillers. The Salesman had a tad of the thriller about it. So did A Separation. Something mysterious happens and – while we and they try to figure out what it was – two people find their relationship increasingly strained.

That scenario is worked through one more time in Farhadi’s first film outside his own language of Farsi. This time he pushes the drama significantly deeper into genre territory. That is both its strength and the source of its occasional lumpiness. There are satisfactory swivels and shocks. But the contrivance is such that you half expect Miss Marple to potter up the driveway and put everyone out of their misery.

The picture is about time. We know this because it begins with a shot of pigeons inside a broken town clock. We know this because an early scene finds Paco (Javier Bardem), a Spanish wine farmer, explaining to a school class that what separates grape juice from wine is… You’re way ahead of me.

Paco is one of many preparing for a wedding in his picturesque town. Laura (Penélope Cruz), a former lover of Paco, has returned from Argentina with daughter Irene (Carla Campra) for the nuptials. Hard times have hit everybody, but the party offers some spiritual and sensual relief. Then Irene goes missing. A ransom note arrives. Eventually, Laura tells her God-bothering husband (the great Ricardo Darin) and he arrives too.

Who did it? Is Paco taking it out on Laura? Did the girl’s dad stage the snatch? Is Irene herself faking it?

As you may have gathered, the picture really does take on the quality of a sun-dapples Murder on the Orient Express. The script’s determination to allocate everyone with a motive ends up feeling clunky. Farhadi enjoys loose ends, but some here seem a little too loose and a little too unintended: video footage of the wedding promises clues it doesn’t deliver.

For all that, Everybody Knows (awful English-language title by the way) delivers satisfactory high-end soapy entertainment. No director does more with worried adults. And if we must watch adults worry then they may as well be played by Bardem and Cruz.