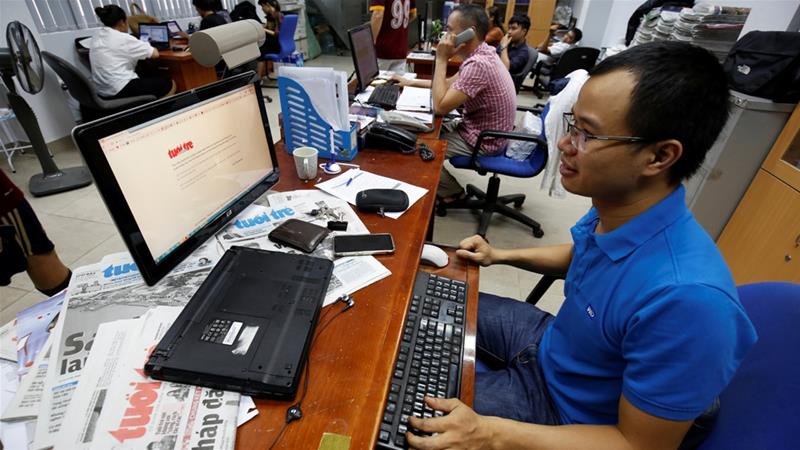 Nguyen Hang* remembers her first day as a “news assistant” in 2008 for an international publication in Vietnam.

She was asked to attend a meeting with the police who asked her to sign on a paper affirming that her new job was to protect the country.

“I never thought that piece of paper would follow me around,” Hang told Al Jazeera. “Every time I planned on doing something which wasn’t to the authorities’ liking, they would put that paper in front of me as a reminder.”

Hang said she has been threatened by intelligence agents numerous times but she added she wasn’t the only one amid shrinking press freedom in the Southeast Asian nation.

Vietnam’s media environment is one of the harshest in Asia, according to the US government-funded rights group, Freedom House, which labelled the Press Freedom Status in the country as “not free”.

The 2019 World Press Freedom Index ranked Vietnam 176th out of 180 countries, down one place from the previous year.

Reporters Without Borders, which published the annual list, said the “level of terror has risen sharply in the past two years, with many citizen-journalists being jailed or expelled in connection with their posts”.

At least 30 journalists and bloggers are now held in Vietnam’s jails, where mistreatment is common, it added.

Independent political parties and unions are banned in the Communist country.

According to Human Rights Watch’s deputy Asia director Phil Robertson, Vietnam’s government remains “one of the most intolerant in the region”.

Representatives of foreign media reporting outside the capital, Hanoi, need official permission to travel and are asked to list what story they are working on, who they will be meeting and what questions they will be asking, they said.

“I once travelled to the China-Vietnam border as a tourist and went to the black market,” said Nguyen Phuong Linh, who left Vietnam in 2014 after working as a journalist for six years.

“I wanted to write a story about it but I was afraid I might get into trouble because I didn’t travel there as a journalist with permission from the ministry. So I had to stop myself from publishing that story.”

Authorities have also been accused of using intimidation tactics against journalists, while strict surveillance has forced many into self-censorship and caused “fear and paranoia”.

Some reporters often worked on “sensitive” stories without credit while others would turn down requests or refuse to work on certain stories deemed dangerous, especially those covering political issues.

The governent and the ruling Communist Party own most of the country’s press. There are several privately owned news outlets but they are tightly controlled by the state.

Due to the government crackdown and restrictions, people have moved to social media to access news and information, according to Viet Tan, an unsanctioned Vietnamese pro-democracy organisation.

Citing “local legal restrictions”, Facebook, however, has blocked access to certain posts about the health of Vietnam’s president while also censoring posts by popular blogger Nguoi Buon Gio, according to Viet Tan.

“If Vietnamese Facebookers can’t read or discuss the health of their political leaders, the future of the Facebook platform in Vietnam does not look encouraging,” said an open letter to Facebook by Viet Tan earlier this month.

“It’s crucial to hold big tech companies, such as Facebook, accountable in order to ensure they are not complicit in restricting free expression,” said Duy Hoang.

Earlier this month, Amnesty International reported the number of prisoners of conscience in Vietnam rose by a third over the past year amid a continuing crackdown on critics.

Amnesty said activists were charged mostly under Article 117 of a new penal code that was implemented in 2018. It prohibits “making, storing, disseminating or propagandising materials and products that aim to oppose the State of the Socialist Republic of Vietnam”.

Every Tuesday, officials from the Ministry of Information have a meeting with chief editors to discuss upcoming news stories and current restrictions.

The guidelines are then passed down the chain of command.

“Transgressors are invariably warned, fined and if they persist suspended or even jailed,” said Carl Thayer, emeritus professor at the University of New South Wales.

In July 2018, Tuoi Tre newspaper’s website was forced to suspend operations for three months for “undermining national unity for attributing remarks to the president that the authorities claim he did not make,” said Thayer.

“Bloggers and independent journalists who publish on the internet are treated in similar fashion,” he said.

A journalist from Tuoi Tre told Al Jazeera the reporters suffered immensely under the ban.

“It was not just about what the newspaper said, it was more about reminding other publications to be careful with what they are saying,” said the journalist, who wished to remain anonymous.

“To some extent, we are still struggling even now to get our numbers back up and we’re being definitely a lot more careful in what is being published. I think whoever wanted us suspended, to some extent, got what they wanted.”

Vietnam’s Ministry of Foreign Affairs and Ministry of Information declined to comment on the allegations.

Journalist Linh says the situation was getting worse for reporters in the country.

“The Vietnamese government makes it look like it’s opening up to press freedom but it’s actually getting stricter,” she said.

and Controls Fear How Its Media paranoia': Vietnam 2019-05-20
Loknath Das
to in With for and of on India The Launched at Samsung Launch A iPhone Android Galaxy More Apple New Rs Be 7 Price Google