A fundamental right to create jobs 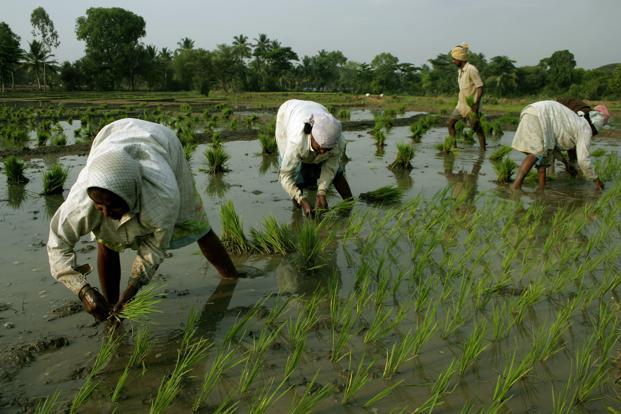 Farmers have the potential to emerge as the largest direct and indirect job creators in the economy. Photo: Bloomberg

During his fourth Independence Day address, Prime Minister Narendra Modi implored the youth to generate employment rather than just seek jobs. He listed out several initiatives of his government to facilitate entrepreneurship. These include access to credit, ease of getting clearances, and skill development. Modi also called for a collective resolve to build a “New India” by 2022. A secure, prosperous and strong nation cannot be built without providing every able-bodied individual an opportunity to create jobs.

It appears that government initiatives on job creation are having limited impact. According to the Centre for Monitoring Indian Economy, 1.5 million jobs were lost during the first four months of 2017. Simultaneously, the number of people declaring themselves unemployed fell by 9.6 million. Seasonal jobs, demonetization, underemployment, reskilling, a reduction in investment, and a shift towards entrepreneurship, are being offered as explanations. If none of these is true, there is a danger of unemployed youth straying towards undesirable activities.

Consequently, there is a need for an urgent rethink on the strategy for creating job creators, while considering population control measures to regulate job seekers. Hitherto, an incremental silo-ed approach has been adopted. We have lacked a coherent and comprehensive strategy.

To ensure that jobs are created on a large scale, we need to treat the freedom to create jobs on a par with other freedoms guaranteed under the Constitution. There is a need to recognize that all sectors, from commercial sex services to defence manufacturing, have the potential to generate direct and indirect employment.

Unreasonable restrictions on practising one’s calling must be dismantled. Personal inclination, and not regulatory provisions, must guide professional choices. These will also help in mainstreaming practices considered unlawful. According legal recognition to activities like commercial sex services, betting, and manufacturing medical marijuana (as suggested by Union minister Maneka Gandhi recently) will help in optimal regulation, prevent abuse, and enable access to medical and insurance facilities.

This will be no different from the government’s approach to alcohol or tobacco—which are not banned in spite of known adverse impacts, but only regulated, thus letting consumers make the final choice. These avenues also bring in huge revenue which can be used for development projects.

Even today, close to half of the working population is engaged in agriculture, including tobacco production. Farmers have the potential to emerge as the largest direct and indirect job creators in the economy. A fundamental right to create jobs will aid in unshackling growth in key sectors like agriculture and allied activities, by repeal of restrictive policies and practices. Farmers will be able to demand their rightful access to land, capital, technology, markets, inputs, skills, remunerative pricing, and the government will be bound to oblige.

We have seen the impact of the rural employment guarantee scheme for quite some time now. While it has been a boon in times of distress, it might have diverted agriculture entrepreneurs to other occupations. Better sustainable results could have been achieved through supporting innovation and profitability enhancement in agriculture.

The potential of a rural non-farm economy has also remained untapped in creating job creators. Due to lack of opportunities, the rural population is migrating to urban centres. However, if there is a fundamental right of job creation, then the divergence in delivery and quality of basic education, health and social service between urban and rural residents will be narrowed.

For instance, the Startup India programme is focused on information technology and related sectors, and restricted to urban centres. It should be replicated in rural areas, with a focus on the non-farm sector. If the infrastructure is in place, investments in retail will open opportunities along the agriculture value chain, including processing, packaging, warehousing and transportation. Rural job creators should be involved in these plans. For every smart city, a smart village or cluster will need to be created.

Despite the hardships, micro, small and medium enterprises (MSMEs) continue to create more jobs than large enterprises. Without hurdles, they will gallop in this mission. MSMEs cannot be treated like large enterprises—they bear a disproportionately higher burden of compliance, while having fewer resources at their disposal. Government and financial institutions must realize this and treat them accordingly.

A digital economy aimed at curing asymmetry in information, finance and data can help in operationalizing the fundamental right to create jobs. The existing trinity of Jan Dhan accounts, Aadhaar and mobile can act as a stepping stone. Digital tools transmitted through mobile phones can aid in providing information about technology, markets and price. Expanding the direct benefits transfer programme can help in expanding access to finance. Informed consent to share Aadhaar-linked data, with adequate privacy protections, can aid in designing customized policies, products and services that cater to the needs of job creators, creating an ecosystem that stimulates job creation.

If Modi expects citizens to create jobs in “New India”, enabling conditions will need to be created. There is no better way to do this than by recognizing that job creators are as important as the creation of jobs.