The notification, published on 27 July 2019, invited applications for filling up vacancies for 25 posts of Assistant Surgeons/Casualty Medical Officers through a one-time registration scheme. These posts had remained unfilled for the last five years in the state’s public health department for want of qualified persons.

Church leaders and activists are at a loss to understand the reason behind the furore, since reservation in government services is available to Christians converted from Scheduled Castes (SCCC) not only in Kerala but also at the Centre and in several other states, including West Bengal.

Father Sabas Ignatius of Trivandrum diocese of Latin Catholic Church said reservation was being made available to the community since they are included in the Central List of Other Backward Classes, who are eligible for reservation as per the provisions of the Constitution.

“If the provision is tantamount to encouraging conversion, the BJP-led government at the Centre should have removed the SCCC community from the list of Other Backward Classes. Instead, the Narendra Modi government has endorsed the reservation to the educationally, economically and socially disadvantaged community,” said the priest, who is leading a struggle for extension of the benefits of reservation to Dalit Christians. 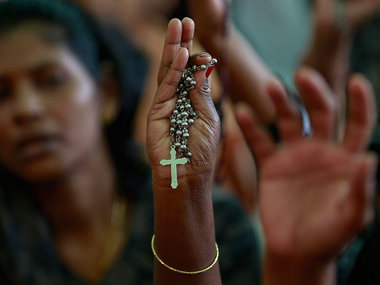 Jitendra Singh, Union Minister of State for Personnel, Public Grievances and Pensions had informed Parliament in March 2016 that members of Scheduled Castes who converted to Christianity are eligible for reservation in the central government services as they are included in the Central List of Other Backward Classes of some of the states.

In Kerala, the SCCC community was included in the Other Backward Classes category in 1957 and 1 percent jobs in the government sector were earmarked for them. The state also has a separate corporation for the community. The body, called Kerala State Development Corporation for Christian Converts and Recommended Communities, was set up in 1980 with the objective of implementing various schemes for their social, educational, economic and cultural upliftment.

Besides the SCCC community, reservation has also been made available to Latin Catholics and Nadar Christians, who are mostly fisherfolk converted by Europeans. State PSC chairman MK Sakeer said they were recruiting members belonging to these communities from time to time and none had raised any objection all these years.

“We have been recruiting members of the SCCC community to various posts in the government since 1957. The present notification was published earlier in 2012 and 2014. We came up with the third notification after we failed to get qualified persons belonging to the SCCC community in both the previous attempts. There was no objection from anybody on any of these occasions,” Sakeer said.

He said that those behind the campaign may have other motives, since the controversy has come at a time when demand for extending the benefit of reservation to Dalit Christians is gaining strength across the country. Some Christian leaders believe that the current controversy could be part of a Sangh Parivar campaign to weaken the movement.

The movement gained a new dimension recently in Kerala with the demand emanating from the Syrian Christians, who constitute over 90 percent of the nearly six-million Christian population in the state.

The Syrian Christians were considered superior in the social and economic ladder as they claimed to be descendants of upper-caste Hindus evangelised by St Thomas in 52 AD. However, a senior bishop of Syro-Malabar Church, the largest of the three Catholic rites in Kerala, said that the notion that Syrian Christians are socially and economically well off is wrong.

Remigos Inchanyil, the bishop of Thamaraserry diocese, said the social, economic and educational condition of Christians as a whole has been declining over the years. Therefore, he demanded establishment of a commission to examine the status of the Christians currently outside the purview of reservation.

The Kerala Christian Youth Movement (KCYM), a youth body of the Catholic Churches, carried forward the bishop’s call by submitting a memorandum to Minister for Minorities Affairs, KT Jaleel, who promised to place it before the appropriate forum for consideration.

However, the bishop’s demand has not gone down well with the Syrian Christians, who are proud of their purported Brahmin ancestry which is lately being questioned in several quarters. Many believe it may boomerang on them. They feel that Inchanayil’s demand, if accepted by the Central government, will push them down in the social hierarchy.

Changanacherry-based Church activist John MT said, “The lower caste Hindus have been embracing Christianity due to the rigid caste system prevailing in the Hindu community. If the Syrian Christians are given the benefit of reservation they will certainly be treated at par with Scheduled Castes and subjected to the same caste discrimination prevailing among Hindus,” he added.

The activist has written a letter to the Church head Cardinal George Alencherry and other senior prelates urging them to restrain the bishop Inchaniyil from pressing his demand. Church activists also fear that the Thamaraserry bishop’s argument could negate the upper caste legacy of the Syrian Christians, which is already facing challenge from several quarters.

Suspicion over the arrival of the Apostle in Kerala was first aired by Pope John Paul II. The Pope, who had wondered whether St Thomas ever set foot in Kerala, had omitted reference to the apostle’s arrival in South India during his state visits to India in 1986 and 1989.

His successor Pope Benedict XVI brought more clarity on the issue by stating in public in September 2006 that the apostle had only reached as far as North-West India, which is today’s Pakistan. The Vatican made amends following strong objection from the Church leaders in Kerala and included South India in the apostle’s travels in its website subsequently.

However, this forced a section of the Christians in Kerala to objectively view the issue. Bishop Geevarghese Mor Coorilos of the Niranam diocese of the Jacobite Syrian Church was one of the first to back the Pope. He said there was no credible historical evidence to support the Syrian Christians’ claim that St Thomas had visited the state and converted upper caste Hindus to Christianity.

Syro Malabar Church’s former official spokesperson Father Paul Thelekatt clarified that there was no possibility for St Thomas to evangelise Brahmins in 52 AD since the migration of Brahmins to Kerala began only in the 7th century.

Historian MGS Narayanan added that it was unlikely for the apostle to have come to Kerala in the first century since at that time the region was hardly populated. He wondered why St Thomas would be in Kerala at a time when the geography that is now Kerala, had only forests and no human habitation.

Father Paul Thelekkat feels that a certain section among Kerala Christians have been clinging on to the St Thomas theory to boast of their upper caste legacy. The Thamaraserry bishop has not made any reference to the arrival of St Thomas in south India. But his demand strengthens those questioning the upper caste legacy of Christians in Kerala and justifies his call for reservation to the Syrian Christians.