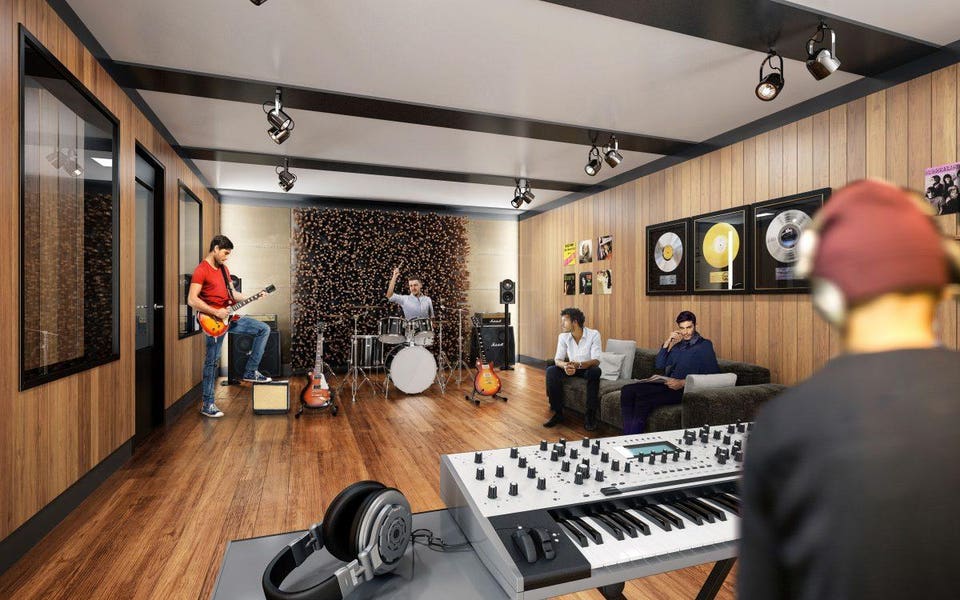 Residents can set up their own music and recording equipment in the Muse Room at Panorama Tower in Miami.FLORIDA EAST COAST REALTY RENDERING

From game rooms to dog grooming stations, communal spaces at multifamily developments have steadily evolved as potential residents chase the next new thing. Now developers nationwide are raising the amenity bar even higher with forays into music-inspired amenities that are just an elevator ride away.

Spoke Apartments, a 363-unit apartment building in Chicago, is one of those developments differentiating itself in the marketplace with a performance lounge known as The Venue. The intimate setting is tailored for jam sessions from musician residents, karaoke nights and stand-up comedy. Down the hall from The Venue is a private jamming/recording studio with soundproofing and equipment. 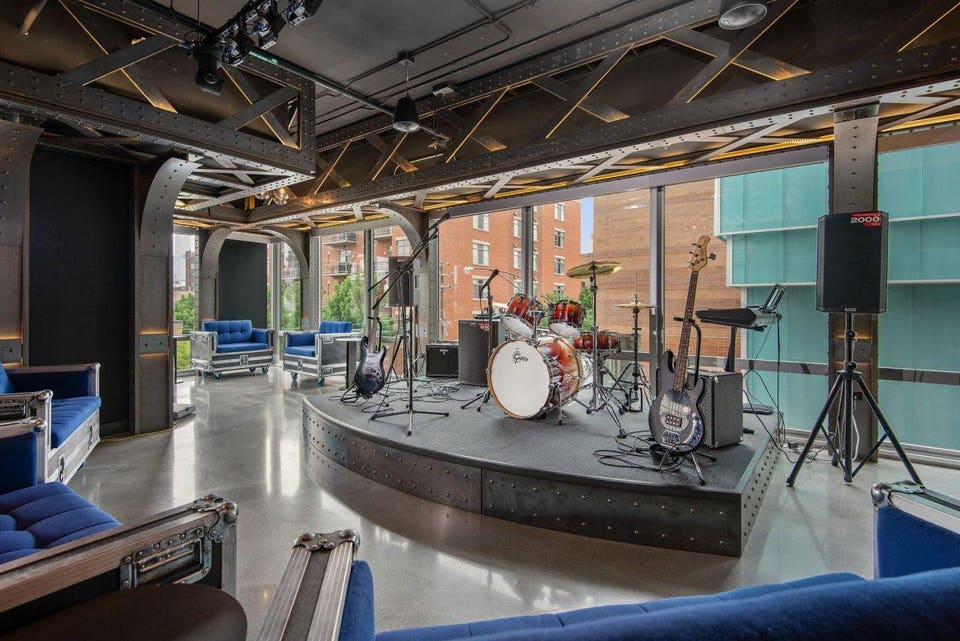 “We view these spaces as ways to connect our residents who love to not only play music but to enjoy music with each other,” said Larry Bond, chairman of Bond Companies, which is co-developer of Spoke Apartments with Morgan Holdings. “Music connects all generations and all walks of life,” he added. “Our space is more than a recording lounge. It’s a place to meet new friends who share the same passions.”

In Nashville, music has long been the common thread connecting the city and its residents. For apartment seekers looking for some creative space, an area on the fifth floor of 909 Flats in downtown Nashville is devoted to a music studio and practice lounge that can be reserved by residents of the 232-unit apartment complex. 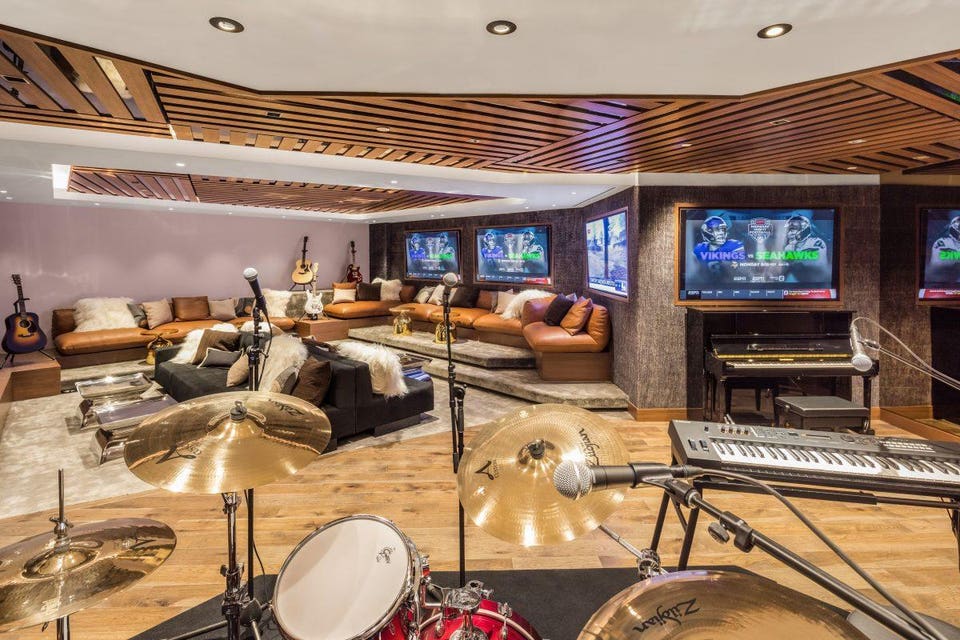 Musician Lenny Kravitz is the creative genius behind the Sound Lounge at The Kent on Manhattan’s Upper East Side.EVAN JOSEPH

The Kent, an 83-unit condominium tower on Manhattan’s Upper East Side, is home to the Sound Lounge, a chic soundproof space designed by Kravitz Design. Musician Lenny Kravitz is the creative genius behind the multisensory retreat, which features a performance space and stage, dance floor and gaming consoles. Residents can practice with their own instruments or select from instruments curated by Kravitz.

Raizy Haas, senior vice president of development at Extell Development, which built The Kent, explained the inspiration for the Sound Lounge.

“When we originally conceived and planned the amenity spaces at The Kent, we understood that families with kids of all ages would be living in the building, especially given its proximity to New York City’s most prestigious K-12 private schools,” said Haas. “Our goal was to create a space where residents could practice their musical skills and express themselves creatively.”

The Sound Lounge also can be reserved for private functions. 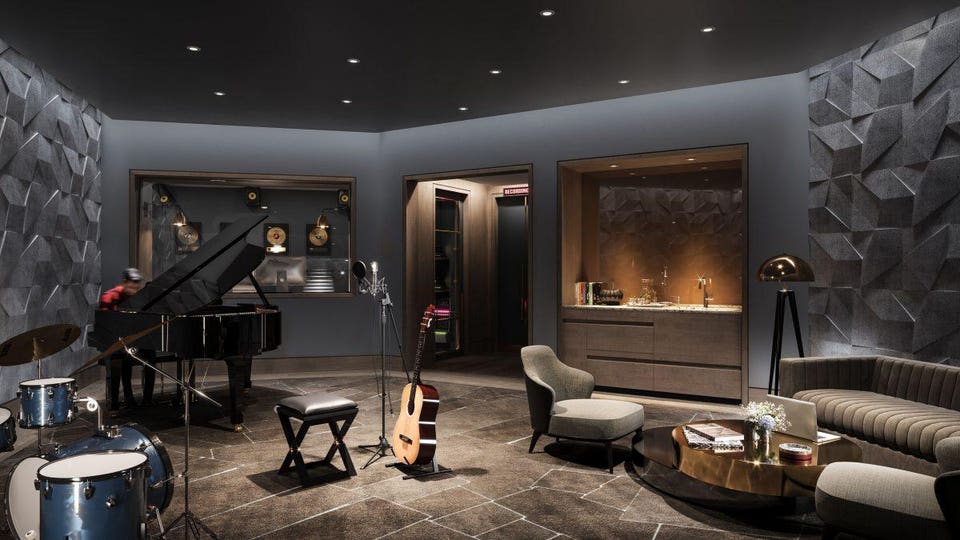 The Waterline Club, which connects all three buildings of Waterline Square, includes a music and recording studio.NOE & ASSOCIATES WITH THE BOUNDARY

A music and recording studio with sound mixing and production equipment made its way onto the list of must-have amenities in the development. Residents and their guests also have access to a baby grand piano, electric guitar and drum kit.

“We believe that the highest caliber of developments do two things well, cater to residents’ known needs and desires such as a fitness center, pool and pet facilities, and create new spaces that residents never knew they needed before,” said James Linsley, president of GID Development Group, which built Waterline Square.  He noted, “While we felt that our recording studio would be attractive to several buyers, particularly given our proximity to Lincoln Center for the Performing Arts, we also believed it would be a wonderful opportunity for many others to expand their experience and provide a sense of discovery.” 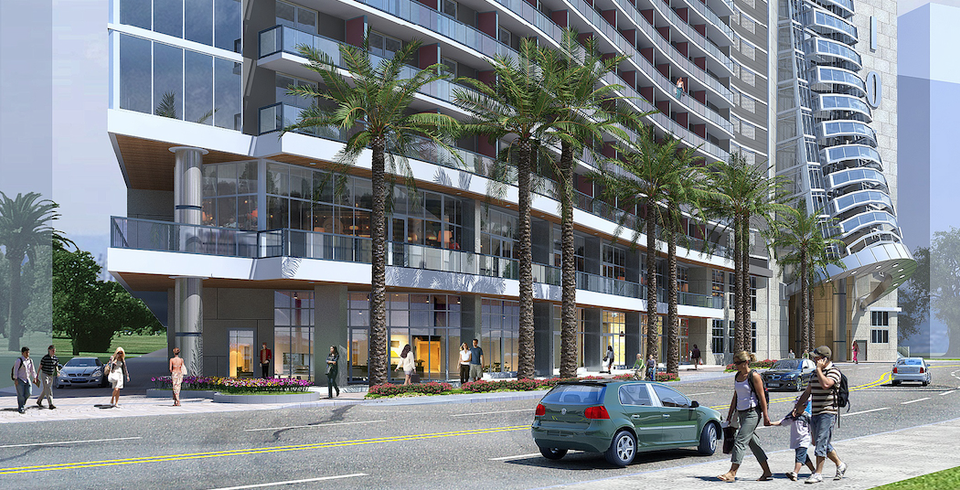 In the heart of Miami’s famed Brickell District  is Panorama Tower, an 821-unit luxury residential rental building developed by Florida East Coast Realty. The high-rise, which is Florida’s tallest building, includes more than 100,000 square feet of amenities, including the soundproof Muse Room, where residents can set up their own music and recording equipment. The studio is convenient for private hours of writing music or collaborating with other musicians.

“We recognize that our residents place a high value on unique services and amenities that can be integrated into their everyday lives,” said Jerome Hollo, executive vice president of Florida East Coast Realty. “The Muse Room allows residents to easily access a private area to create something they are passionate about, whenever they feel inspired.”

In Atlanta, construction is underway on The Mix, an urban infill mixed-use development near Georgia State University set to open in the fall. The 26-story tower will offer a recording studio among several other amenities.

“With the number of kids now recording their own music, podcasts and/or videos and disseminating a significant amount of digital content, a recording studio seemed like an appropriate and attractive amenity that catered to that trend,” said Will Casaday, vice president of development for South City Partners.