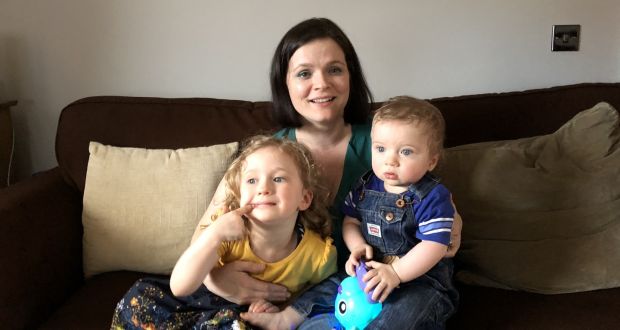 Ciara O’Brien and co: “I try to enjoy almost all of it, because I’m reliably informed this stage passes quickly, and before I know it, they’ll be either ignoring my existence or telling me they hate me.”

I am not the type of parent I thought I’d be. Let’s be honest, is there anyone out there who would say they are?

It’s safe to say most people have an idealised version of how they will cope as parents. In my case, it involved endless patience and the ability to steer my children quietly and efficiently away from anything considered Bad Stuff and towards Good Wholesome Fun.

My children would eat homemade food (fish fingers are homemade right?) and spend time learning to appreciate books. The three year old loves books, that is one thing I got right, but she is on first name terms with my mother’s Android tablet (apparently it’s Betsy), knows what Netflix is, and is a whizz with a touchscreen, while the almost-one year old has used my iPhone as a chew toy so often, he’s left teeth marks on the case and has figured out the emergency call system that gets him a direct line to both his father and his grandmother, usually at 7am.

Mornings are a whirlwind of me throwing different items of clothing in the vicinity of my daughter and hoping that at least one of them will meet with her approval. That’s another thing I’ve caved on: who makes wardrobe choices. On various occasions, she has gone to Montessori wearing wellies, a tutu and a Wonderwoman costume, because at 8am on a busy morning, that wasn’t a hill I wanted to die on.

We have opposing views on everything from bedtimes – she thinks they’re negotiable, I know otherwise – to whether chocolate is an acceptable substitute for breakfast.

My food is fair game for tiny hands, and my Apple Music account has an unacceptable amount of child-friendly music mixed in. It means you can’t hit shuffle and go for it, because right between Rage Against the Machine and Metallica, you’ll get Ernie serenading you with Rubber Ducky. Though I have to admit it’s better than the Daniel Tiger soundtrack. We disagreed over that one too. She won.

You can’t hit shuffle and go for it, because right between Rage Against the Machine and Metallica, you’ll get Ernie serenading you with Rubber Ducky

I have no one to blame but myself; after all, it’s my genes that are the key factor. The first thing my dad said to me after I told him I was pregnant was that he hoped it would be a girl, and that she would be just like me. You could take that as a compliment, but if you knew me as an iron-willed toddler and an even worse teenager, you’d see it for the poetic justice my parents deserved.

To this day, I’m still told the story of the time I managed to make my ever-placid grandfather lose the head altogether; it involves a door frame and a grip as steely as my determination that I was following my older brother out that afternoon.

I fondly imagined – though knew it would be unlikely – all my child would need was a slightly stern word, maybe “the look”, and they would do as they were asked. Although I have perfected “the mammy look”, I hadn’t reckoned with an iron-willed mini me. Let’s just say my dad has had many a cause to laugh to himself over the past three years thanks to Stubborn Child: The Revenge.

I may have had an idealised view of what my parenting would be, but at least I knew it. I knew I would abandon many of my high-minded ideals, because sometimes you just want a few extra minutes sleep on a Saturday, and if Peppa Pig is what will get it for you, you’ll suffer through the obnoxious horror of George’s wailing and Peppa fat-shaming Daddy Pig.

There are also the things I never realised that I would enjoy. Playing endless “let’s pretend” games. Singing along to Disney songs at top volume in the car. Laughing at the same ridiculous jokes over and over again, even though it wasn’t that funny the first time around but it’s the way she tells them. Even spending a fortune to go to children’s theatre shows that have a volume level somewhere around deafening and a constant upsell at the merch stand.

I try to enjoy almost all of it, because I’m reliably informed this stage passes quickly, and before I know it, they’ll be either ignoring my existence or telling me they hate me.

So I am not the type of parent I thought I’d be.

But that’s not necessarily a bad thing.