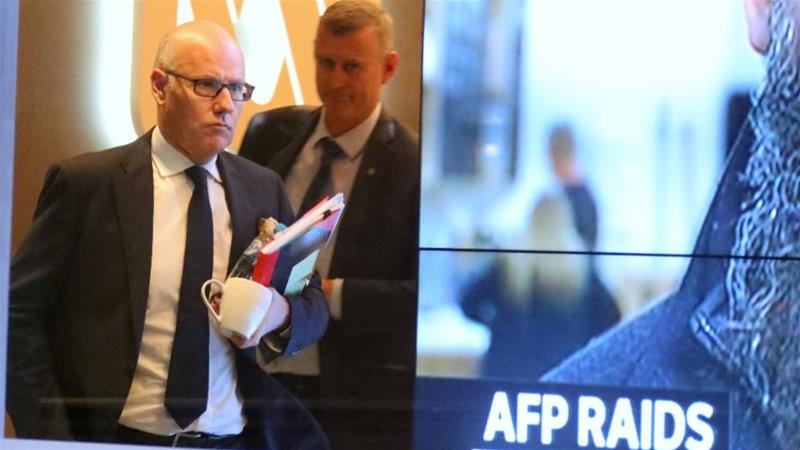 Melbourne, Australia – High-profile raids against two separate media outlets by Australian police have been widely condemned by news organisations and rights groups, renewing calls for greater protection of whistle-blowers and journalists in the country.

The Australian Federal Police on Wednesday raidedthe Sydney offices of the national broadcaster ABC over stories it ran in 2017 exposing alleged war crimes by Australian special forces against civilians in Afghanistan, dubbed The Afghan Files.

David Anderson, the ABC’s managing director, said in a statement that “it is highly unusual for the national broadcaster to be raided in this way”. The search warrant was remarkably wide-reaching, allowing police to “add, copy, delete or alter” material on the ABC’s computer system.

“This is a serious development and raises legitimate concerns over freedom of the press and proper public scrutiny of national security and defence matters,” Anderson said.

The operation at the ABC came a day after police raided the Canberra home of Annika Smethurst, a print journalist with News Corp Australia. The warrant allowed authorities to search her home, phone and computer.

“If that [Smethurst’s story] isn’t in the highest public interest, then I don’t know what is,” Johan Lidberg, deputy head of journalism at Monash University, told Al Jazeera. “To then go after her source is cowardly.”

The Afghan Files reports emerged out of hundreds of pages of secret military documents that were leaked to the ABC by David William McBride, a former lawyer for Australian special forces in Afghanistan. McBride was also named in the warrant to search the ABC’s offices this week.

The documents revealed there was a concern in the defence establishment about “warrior culture” among the special forces.

ABC reports documented at least 10 incidents between 2009 and 2013 where Australian troops shot dead unarmed men and children. The series also shed light on infighting within Australia’s defence forces sparked by the reported severing of dead Taliban fighters’ hands, a story first revealed by the ABC in 2013.

Tim O’Connor, campaigns manager at Amnesty International Australia, said The Afghan Files provided an opportunity for the Australian military to “really come clean on that, and show how it was responding. These are organisations that are funded by the Australian taxpayer”.

Instead, said O’Connor, “to our knowledge nobody has been held accountable”.

The raids against the ABC and News Corp are the latest in a string of cases advocates and journalists say are indicative of a shrinking space for exposing wrongdoing in Australia.

In another instance, a whistle-blower who revealed abuses of power at the Australian Tax Office faces more than 160 years in prison for allegedly breaching laws on handling public documents and telephone tapping without consent.

Commenting on the raids, Peter Charley, executive producer of Al Jazeera’s Investigative Unit, said “the great danger” was that they were going to have “a chilling effect on whistle-blowers”.

“Clearly, the ABC raid was aimed not necessarily at the reporters named in the search warrant, it was aimed at trying to identify and gather evidence on the whistle-blower himself,” he told Al Jazeera’s The Stream programme. “The most likely and logical outcome is that whistle-blowers will be afraid to step up now, they will be afraid to come forward with information they believe is of important public interest.”

Asked about the raids, Australian Prime Minister Scott Morrison told reporters that while he believed in freedom of the press, “no one is above the law”.

Many have questioned the timing of the raids, however, given they come just weeks after Morrison’s right-leaning government was re-elected in national elections.

“Just days after a federal election, the Federal Police launches this attack on press freedom,” said Marcus Strom of the Media, Entertainment and Arts Alliance, Australia’s media union in a statement. “It seems that when the truth embarrasses the government, the result is the Federal Police will come knocking at your door.”

Mark Baker, CEO of the Melbourne Press Club, told Al Jazeera that the government’s attempts to distance itself from the raids were “absurd”. “I think it’s disgraceful for the prime minister and other senior members of the government to claim that they’re arm’s length from these activities,” he said.

“These raids were conducted under the legislation which this government pushed through parliament last year and other legislation passed earlier on which has seriously eroded the freedoms and protections of the media.”

The Morrison government introduced a raft of new secrecy offences in late 2018.

Lidberg, the associate professor at Monash, told Al Jazeera he was “disgusted” by the raids, calling it a “clear and very worrying escalation”. Australia is a “world leader” in passing anti-terror and national security laws that threaten media freedom, he said.

Since the September 11, 2001 attacks in the United States, more than 64 pieces of legislation had been passed with bipartisan support, which had created a “huge chilling effect”, said Lidberg.

“Australia’s got the most national security laws of any Western democracy,” Amnesty’s O’Connor said. “It seems that it’s not balanced with public interest at all.”

Australia dropped two places to 21st, out of 180 countries, in the 2019 Press Freedom Index released by Reporters Without Borders (RSF), which highlighted “the fact that independent investigative reporters and whistle-blowers face draconian legislation.”

“Australia adopted one of the toughest defamation laws in the world’s liberal democracies in 2018, while its laws on terrorism and national security make covering these issues almost impossible,” RSF added. It also cited the “very conservative” nature of Morrison’s government.

These latest raids have renewed calls for a media freedom bill, safeguards for whistle-blowers and freedom of speech protections, as recommended in a white paper released last month by the Alliance for Journalists’ Freedom (AJF), a group cofounded by former Al Jazeera reporter Peter Greste.

“We need a media freedom act to act as a buffer against all of the laws that infringe upon journalists’ ability to do their work,” Peter Wilkinson, AJF chair, told Al Jazeera.

“Remember the fundamental issue here is that journalists were telling about the problems and potential problems with people misbehaving inside government,” Wilkinson said. “The stories weren’t endangering lives, they were informing the public about things that looked like had gone wrong.”