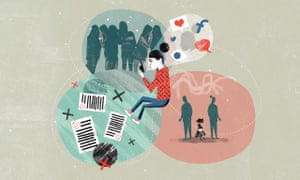 Nothing turns a parent’s heart inside out like the unhappiness of a child, and your own helplessness in the face of it. When they were tiny, it was all so much easier. Toddlers can turn from sunny to inconsolable in a second, but are equally miraculously restored by a nap or a box of raisins. The unhappiness of an older child, however, is infinitely more frightening. Suddenly adults too are out of their depth, thrashing around for answers, terrified that there might not be any.

Last week, in the middle of an emotive public debate about teenage suicides, the government’s former mental health champion for schools, Natasha Devon, listed the top things that pupils tell her are threatening their mental wellbeing. The order has probably changed over the years – I’m not sure academic anxiety would have topped the list in the 1990s – but otherwise it’s been the stuff of teenage diaries since time immemorial: problems at home, or having nobody to talk to. Striking by its absence, however, was something that increasingly worries so many parents. “Pressure from social media to live a perfect life” scraped in only at seventh on the children’s list.

This week the chief medical officers issued some thoroughly sensible guidance on screen use: ditch the screens at meal times in favour of a proper conversation, and don’t let kids have mobile phones in their bedrooms keeping them awake all night. Ministers have taken an equally sensible steptowards treating the biggest platforms like the publishers they have in reality become, and holding them responsible for the content they host.

Change has been brewing in Whitehall for a while, but an impassioned campaign by the parents of 14-year-old Molly Russell – who say she had looked at material related to anxiety, depression, self-harm and suicide on social media before taking her own life – has surely helped shift public opinion. There will always be spaces online where anything goes, but if brands such as Instagram or Facebook want to maintain the confidence of their users then they have to do better. So far, so good.

But the debate about social media and teenage mental health is getting uncomfortably reminiscent of the age-old argument about whether women’s magazines full of skinny models were making young girls anorexic, to which the answer is that basing an industry on half-starved young women is wrong on every level but eating disorders are infinitely more complicated than that.

Glossy magazines were only the most visible expression of a commercial culture based on making women think there’s something wrong with them. But even blaming eating disorders on that broader culture sidelines the issue of other things that may be going on in individual girls’ lives, or how both those factors might interact with any organic cause of mental illness. Girls who are completely happy with their bodies and lives don’t generally develop eating disorders overnight just by reading fashion spreads. Understanding this doesn’t remotely absolve fashion magazines from recognising their social responsibilities, both to readers and to models, and the changes some have made are also sensible. But they only get us so far.

Research does suggest that children who spend a lot of time online are unhappier than children who don’t, but it’s still unclear which way round the cause and effect are. Are social media so toxic that they drag otherwise happy children down, or do the lonely and troubled spend longer than others seeking comfort from them? Or is the truth somewhere in the middle, with unhappy kids more likely to chase a kind of gratification that will ultimately leave them feeling worse, like adults seeking solace in a bottle? If it’s the latter, then obviously social media companies would still have a moral obligation to vulnerable users. But that would be only half the picture. The other half is asking why so many kids are vulnerable in the first place.

Depression, anxiety and self-loathing don’t always come neatly packaged with an explanation or a cause. Anyone who has lost someone to suicide, meanwhile, knows that sometimes the answers we long for can’t be found. The stories that get most airtime are invariably these terrifying ones, where a loving family just can’t understand how the darkness enveloped their beloved child.

But those are not the only stories. There is a darker side to teenage mental health, one for which faceless giant tech companies or exam pressure can’t be blamed but for which evidence is strong. Children who suffer two or more of what are known as adverse childhood experiences – anything from bereavement or parental separation to neglect, abuse, or a parent with addiction – are three and a half times more likely to have mental health problems when they grow up. Children raised in extreme poverty or in care, children who have witnessed domestic violence, children who for whatever reason feel ignored or overlooked or have nobody at home they can comfortably talk to, are all arguably more at risk than most. And unless their parents can afford to go private, then some may find themselves waiting up to 18 months for referrals to overstretched adolescent mental health services. As Devon put it, we have taught kids that it’s good to talk about their feelings, but sometimes that just means “children can tell you precisely what’s wrong but have nowhere to turn for support”.

So by all means let’s shield kids from gruesome content, teach them self-esteem can’t be found in Instagram likes, encourage them to switch off and engage in real life. But so long as there are kids whose real life is the problem, we’ll still only see half the picture.

• Gaby Hinsliff is a Guardian columnist

… we have a small favour to ask. This is The Guardian’s model for open, independent journalism: free for those who can’t afford it, supported by those who can. Readers’ support powers our work, giving our reporting impact and safeguarding our essential editorial independence. This means the responsibility for protecting independent journalism is shared, empowering us all to bring about real change around the world. Your support gives Guardian journalists the time, space and freedom to report with tenacity and rigor, to shed light where others won’t. It emboldens us to challenge authority and question the status quo. We have chosen an approach that allows us to keep our journalism accessible to all, regardless of where they live or what they can afford. This means we can foster inclusivity, diversity, make space for debate, inspire conversation – so more people, across the world, have access to accurate information with integrity at its heart.

The Guardian is editorially independent, meaning we set our own agenda. Our journalism is free from commercial bias and not influenced by billionaire owners, politicians or shareholders. No one edits our editor. No one steers our opinion. This is important as it enables us to give a voice to those less heard, challenge the powerful and hold them to account. It’s what makes us different to so many others in the media, at a time when factual, honest reporting is critical.

angst? Blaming Child for Half Its Media Only picture; Social The 2019-02-08
Loknath Das
to in With for and of on India The Launched at Samsung Launch A iPhone Android Galaxy More Apple Rs New Be 7 Price Google