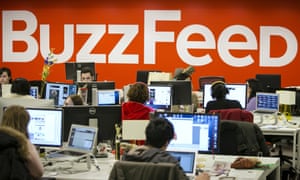 The Australian arm of BuzzFeed will have to cut 11 staff as a global downsizing strategy targets 200 of the digital publisher’s international workforce.

BuzzFeedOz news reporter Alice Workman said she and every member of the news team received a letter about redundancies on Tuesday morning which indicated BuzzFeedOz was “reducing its overall news footprint”.

It is unclear how many of the jobs lost will be in news, but every member of the 14-strong team received a letter. There are 40 employees in Australia across editorial and commercial roles in Sydney and Canberra.

“We’ve built a strong brand, loyal audience and growing business in Australia and BuzzFeed remains committed to building on that foundation for the long-term,” a spokesman told Guardian Australia.

In a separate announcement Verizon Media Group – the owner of HuffPost, Yahoo and AOL – said it would sack about 800 employees.

BuzzFeed staff in the US were initially not paid out all their entitlements, prompting an open letter from employees to Peretti last week demanding they all receive their unpaid holiday leave.

But CNN reported on Tuesday that BuzzFeed had reversed its decision and would pay recently laid off employees in full.

In Australia only part of the BuzzFeed workforce is unionised, but the law requires all entitlements are paid out.

Globally the cuts will affect BuzzFeed’s news operations, which had largely been insulated from previous rounds of redundancies. The site had been expanding its commitment to news and last year made the shortlist for a Pulitzer prize.

The general manager of BuzzFeedOz, Simon Crerar, said the consultation period would run for at least a week. “Mates: send beer,” Crerar said on Twitter. “Haters: no, I will not learn to code.”

Crerar said a number of new roles would be created in Sydney in line with BuzzFeed’s new business priorities.