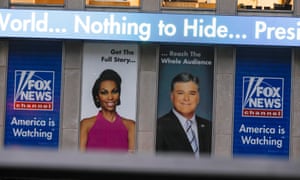 Televised public impeachment hearings on Donald Trump start on Wednesday and are likely to grip America with a litany of damaging testimony.

Transcripts of private hearings already show witnesses testifying about the same basic scenario: Trump wanted Ukraine to investigate his potential rival in the 2020 election Joe Biden and his son Hunter, who had worked in the country. That has spurred weeks of negative news cycles for Trump. When those same witnesses are grilled live on television it is likely to only get worse for the president.

Except on conservative media.

The themes advanced by conservative commentators have been wildly supportive of the president and hostile toward impeachment, often painting an alternative reality of a brutal, bullying, illegal and unfair plot against Trump.

Fox Business’s Lou Dobbs celebrated a Republican protest saying, “the Republicans, God bless them for actually doing something. I am so impressed.” He also described the inquiry as the “illegal efforts of the radical Dems who are holding secret hearings in their attempts to unseat the president”, Columbia Journalism Review noted.

On the far-right news website Breitbart, some of the recently trending topics were “Hoaxblower Madness” – a reference to the anonymous whistleblower, whose complaint ultimately spurred the impeachment inquiry. One Breitbart headline about the House intelligence committee chair, Adam Schiff, claimed: “Adam Schiff Makes Up New Rules for Impeachment Inquiry; Restricts Republican Witness Questions.”

The lead story on One America News Network’s website on Friday afternoon (nestled between two links to the same story on “abortions targeting down syndrome fetuses”), featured a headline on the ousted Ukraine ambassador Marie Yovanovitch, that reads: “Report: Yovanovitch Committed Perjury According To Newly Discovered Emails.”

But despite their crusading on behalf of Trump and his supporters and their campaign to stop it, the public phase of the impeachment enquiry will still get mass coverage. The live proceedings are expected to be a ratings bonanza for television networks as well as a traffic boon for news websites – including the conservative media groups attacking it.

This would be in keeping with audience trends during other major congressional hearings in US history. Seventy-one per cent of Americans watched the 1973 Watergate hearings, reported Reuters.

But this intense demand for coverage raises a question for the conservative press. How do pro-Trump outlets – in keeping with their audience’s tastes – handle a story that’s inherently negative for him?

Charles Herring, the president of One America News, said they will be “providing wall-to-wall coverage of the impeachment hearings”.

“It is difficult to avoid when the actual hearings are happening on live television – even for Fox,” said Rick Wilson, a Republican political consultant and Trump critic. “They’ll cover it.”

But viewers will find the time of day will influence Fox’s coverage. Fox News’ daytime programming deals with news; while primetime programming boasts a conservative lineup of opinion-driven hosts like Trump cheerleaders Sean Hannity, Tucker Carlson and Pirro. So, in effect Fox will serve up two doses of impeachment coverage: one largely factual, and the other wildly skewed in favor of Trump.

“The Fox audience is bifurcated. The daytime Fox audience is not the same as the audience that’s tuning in at night,” Wilson said. “There are still some hard news reporters at Fox, and they’re not happy. They’re dealing with this reality distortion field.”

But meeting conservative viewers’ demands has made Fox “dependent” on Trump “for an audience that exists only because of him”, Wilson said.

According to a new study by progressive Crooked Media and Change Research, 89% of Republicans who watch Fox News are against impeachment because they don’t think the key facts in the Trump-Ukraine controversy are true. The share dips to 59% for Republicans who don’t watch Fox, the survey of 971 registered voters said.

The conservative media plays a key role in Trump and his allies’ defense strategy. As the testimony in the impeachment inquiry has so far consistently shown the existence of a “quid pro quo” attempt with Ukraine, attacks on it by Republicans have largely focused on the process itself, not the facts it’s uncovering.

That has been echoed on conservative media, providing a vital echo chamber for Republican talking points.

“I think what they’re going to do is kind of attack the process,” said Brad Adgate, an independent media consultant and Forbes contributor, explaining their motif would be “This is a circus and that this is just a hoax.”

And the ultimate aim of all this is clear: shoring up Trump’s base as the 2020 election looms into view.

If the Republican base remains supportive of Trump, reporting that caters to it “will help stabilize the base, will help keep him in place”, said Thomas E Patterson, the Bradlee professor of government and the press and author of How America Lost Its Mind.

“As long as the base holds, the Republican Senate, assuming he gets impeached in the House, Republican senators will almost to the person not vote for conviction,” he said. “I think the rightwing media are important to the issue of Trump’s survival and they’re going to do their damndest to make sure he’s not going to get convicted.”