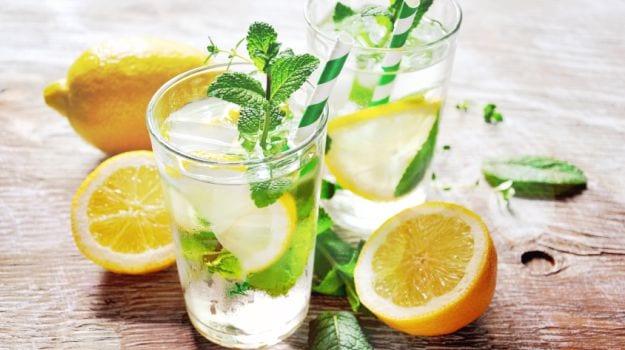 Staying slim or getting back in shape couldn’t have been easier, if this new study is to be believed. According to a team of researchers at University of Illinois, the easiest strategy to keep your weight down is to drink more water.  The study, published in the Journal of Human Nutrition and Dietetics, examined the dietary habits of more than 18,300 US adults and found that the majority of people who increased their consumption of plain water by one percent managed to reduce their total daily calorie intake as well as their consumption of saturated fat, sugar, sodium and cholesterol.

The findings showed that people who increased their consumption of water by one, two or three cups daily decreased their total energy intake by 68 to 205 calories daily and their sodium intake by 78 to 235 grams. “The impact of water intake on the diet was similar across race or ethnicity, education and income levels and body weight status,” said researcher Ruopeng An, professor at the University of Illinois in the US.

“This finding indicates that it might be sufficient to design and deliver universal nutrition interventions and education campaigns that promote water consumption in replacement of beverages with calories in diverse population subgroups without profound concerns about message and strategy customization,” An noted.

The researchers found that on average, participants consumed about 4.2 cups of plain water on a daily basis, accounting for slightly more than 30 percent of their total dietary water intake.  Their average calorie intake was 2,157 calories, including 125 calories from sugar-sweetened beverages and 432 calories from discretionary foods, which are low-nutrition, calorie-dense foods such as desserts, pastries and snack mixes that add variety to but are not necessary for a healthy diet.

A small but statistically significant increase in daily consumption of water was associated with a 8.6-calorie decrease in daily energy intake, as well as slight reductions in the intake of sugar-sweetened beverages and discretionary foods along with their consumption of fat, sugar, sodium and cholesterol.

Dr. Rupali Datta, Clinical Nutritionist at Fortis-Escorts Hospital agrees, “When you are thirsty, your first choice should be a glass of water. Moreover, in most cases, the starting point for your hunger pangs is probably low levels of electrolyte in your body. To control voracious hunger, first reach out for a glass of water and then wait for five minutes before you decide to eat something. Drinking water fills up the space and prevents overeating.”

This is not the first time that science has shown the benefits of drinking more water.  In 2014, experts at the University of Birmingham found that drinking 500ml of water half-an-hour before eating the three main meals of the day may help you lose weight. It was then concluded that drinking more water can boost your metabolism, flush out toxins and act as an appetite suppressant which is why it is important to drink before meals.

“Water is a nutrient that your body needs. It maintains the balance of your bodily fluids, digestive functions and helps in the maintenance of your body temperature. You should drink about 8 to 10 glasses of water everyday to keep your body hydrated,” Dr. Datta explains. So, drink up!

[“source-ndtv”]
Drink Easiest More Slim: Stay The to Water Way 2016-03-09
srijita
to in With for and of on India The Launched at Samsung Launch A iPhone Android Galaxy More Apple Rs New Be 7 Price Google