Facebook Messenger Has a Hidden Chess Game; Here’s How to Get Started 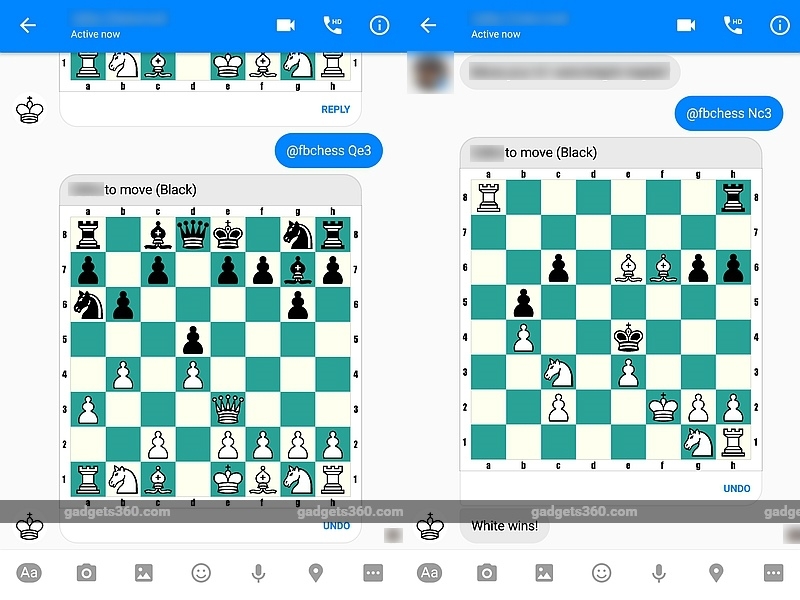 The Facebook Messenger app, which many of us use every day for chatting and voice calls, has a hidden chess game. The game can be played by any user in a personal chat window. It works on the Messenger app for Android and iOS, the Messenger Web client (www.messenger.com), and via messages on the Facebook Web interface.

To play chess on the Facebook Messenger, all you need to do is enter “@fbchess play” command to begin playing a game with the person you’re chatting with.

To move your pieces, you will need to be familiar with the Standard Algebraic Notation commands used to refer both the pieces and locations on the board. Entering a command such as “@fbchess Pd3” would move a pawn to d3 location. For reference, K is for King, Q for Queen, B for Bishop, N for Knight, R for Rook and P is for Pawn.

If you get stuck, you can always enter “@fbchess help” in the conversation’s text field. A list of commands and instructions will then show up. The game tries its best to help users from losing and prevents them from making any move that does not protect the King, when in ‘Check’ situation. If you feel like giving up, you can always type “@fbchess resign”.

The hidden chess game was first discovered a month ago by Reddit users.

It is worth mentioning that Facebook Messenger got its first game – Draw Something – last year.

Facebook last month announced that the number of people using its Messenger application monthly has shot past 800 million, with more features on the way to win even more fans.

Improvements to the smartphone messaging application last year included ramping up speed, making it easier to send photos, adding video calling, letting businesses use it for customer service and adding the ability to send money to friends.

[“source-gadgets.ndtv”]
A Chess Facebook Game Get Has Here's Hidden How Messenger Started to 2016-02-09
srijita
to in With for and of on India The Launched at Samsung Launch A iPhone Android Galaxy More Apple Rs New Be 7 Price Google