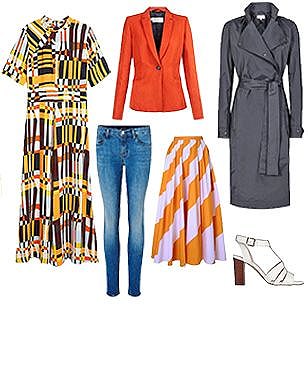 A pair of muddy jeans. A crumpled blue Ikea shopping bag. A hi-viz jacket of the kind worn by workmen.

Unlikely sources of inspiration for high fashion? You’d think so. Yet in a baffling trend, catwalk designers have made top-end versions of all these cheap items — and are selling them at outrageous prices.

This week, French fashion house Balenciaga — once known for its elegant couture designs, as worn by royalty — brought out an almost indistinguishable take on the Ikea bag, yours for £1,640 (the Ikea version sells for 99p).

True, Balenciaga’s bag is made of animal hide, not nylon, and has a zip top. But all the same, Ikea says it is ‘deeply flattered’.

So what lies behind the growing trend?

First, copying dirt-cheap items is an easy way to appear ‘edgy’ and controversial, and so attract attention to generate sales.

Second, designers are trying to turn away from the gaudy ‘It bag’ era of the Nineties.

Since the economic crash of the Noughties, they have been embracing ‘stealth wealth’ instead: expensive clothes and accessories that are logo-free, so customers feel they are in a secret club where one’s wealth and taste are not flaunted but can still be recognised by the elite.

Big brands that embraced simple designs, such as Celine and Mulberry, started to boom. And before long the rest had followed suit.

Now designers are vying to see who can design the most ‘stealth wealth’ item.

It’s also a way for customers to boast that they don’t need logos to prove they’re super-wealthy.

Besides, copying cheap goods serves as a clever fightback against the £500 billion global trade in counterfeit goods. Make high-end fashion resemble something cheap in the first place, and it becomes far less desirable to copy.

A cheap-looking Gucci top for £260? Every fashion editor has one. And even Camilla, Duchess of Cornwall, has a Hindmarch clutch emblazoned with the Heinz Baked Bean logo.

All we mere mortals can hope for is that the pendulum will soon swing the other way.