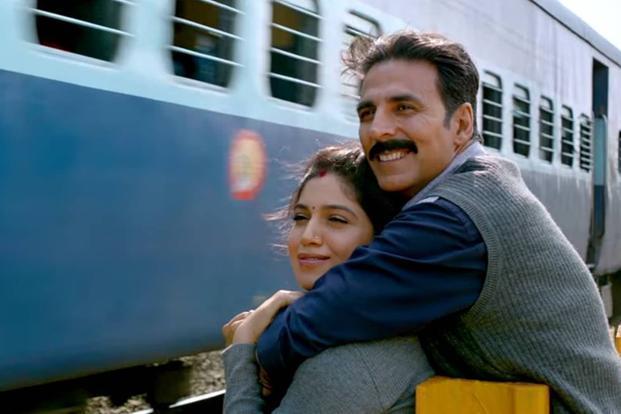 Akshay Kumar and Bhumi Pednekar in a still from ‘Toilet: Ek Prem Katha’.

New Delhi: For Akshay Kumar’s satirical comedy Toilet: Ek Prem Katha, an Independence Day holiday weekend release, digital cinema distribution network UFO Moviez reported a 70% increase in advertiser interest compared to a regular Friday. In April, director S.S. Rajamouli’s war epic Baahubali 2: The Conclusion had proven disproportionately large for the company that made Rs179 crore in advertising revenue in fiscal year 2017 and has seen a 30-35% rise in cinema advertising in the past four years alone, according to company data.

Indian films riding on big names in the star cast and cashing in on festive weekends like Diwali, Christmas and Eid have brought much joy to exhibition and distribution services across the industry as far as in-cinema advertising is concerned, anything between 60-200%, according to film distribution and exhibition business experts.

“Yes, we do see a drastic increase (in advertising revenue during festive weekends),” said Devang Sampat, director (strategic initiatives) at Cinepolis India, adding that there are about 15-20 weeks in a year where advertisers are quite bullish about in-cinema slots and these are usually either films with big star cast or those releasing around important festivals, two phenomena that often tend to coincide.

“We have our advertising inventory full during those weeks and are able to charge 40% additional premium on rates that work for a regular weekend,” Sampat said.

The shift from single screens to multiplexes remains the most important contributing factor.

“As multiplexes started popping up around cities, cinema-watching moved from what was traditionally a low-income mass audience towards a much higher, middle-class income audience. That obviously brought it the attention of advertisers and media buyers,” said Rahul Puri, managing director at Mukta Arts, which runs cinema chain Mukta A2 Cinemas.

The issue until that point was that exhibitors used 35mm negative prints for film projection, Puri said. That meant that there was no consistency and advertisers did not know how distributors or exhibitors around the country were going to play their ads or if they would be chopped out.

“Then in 2005, digital play-outs began in India and once that took off, it guaranteed advertisers consistency and I think that made a huge impression. So one has seen a gradual but a very consistent rise in in-cinema advertising primarily since single screens moved out,” Puri said.

There were other reasons too.

“Digitization helped convert single screens into multiplexes giving them the option to run multiple pieces of content through the day in different time brackets. So as the number of screens goes up, it helps increase the inventory available with an aggregator to monetize,” said Siddharth Bhardwaj, chief marketing officer-head of enterprise sales at UFO Moviez, a digital cinema operator and distribution network.

In India, advertising slots are basically decided on a per screen per week basis, which in case of UFO, can range from Rs3,000-Rs20,000, depending on the theatre’s seating capacity, quality of screen, target audience and ticket pricing.

“Earlier, cinema was thought of as a separate spend, but now it’s part of the audio-visual plan of any campaign,” Bhardwaj said. Though it is still predominantly male-focused, in-cinema advertising has moved from traditional food, drink and youth-based categories.

“Brands which are looking at geo-targeting specific markets without much wastage are coming on board to use cinema aggressively,” Bhardwaj said. “These are people who advertise on cricket, news or movie channels and we provide similar audiences and reach. They include two-wheelers, cement, steel, pharmaceuticals, e-commerce, FMCG (fast-moving consumer goods) and television itself,” he said.