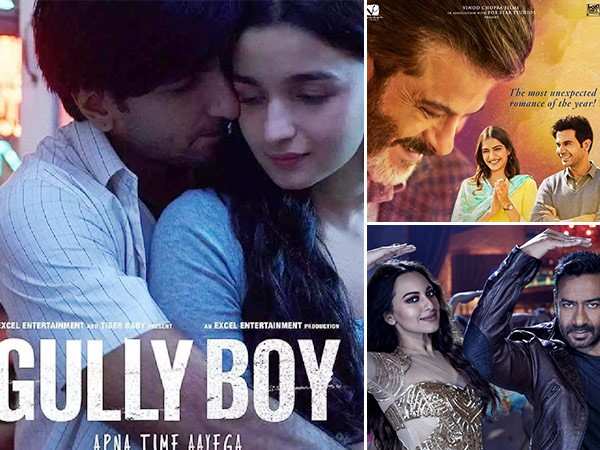 The month of February was definitely a pretty exciting one for Bollywood as along with classic commercial movies, we saw films that tried experimenting with different kinds of subjects. On one hand, we had the massy comedy in Total Dhamaal and on the other we were treated with some Indian rap in Gully Boy. So, here’s listing Bollywood’s highest grossers from the month gone by.

Until now, in India, the world of music pretty much started and ended at Bollywood. Unless our crowd didn’t watch their favourite stars groove to the song on screen, it seemed that these tracks never took off. Albeit there were some exceptions, the biggest numbers around aways belonged to a Bollywood film. However, the era of the internet has completely overhauled the music scene in our country. You don’t need a studio or an a-lister star dancing to your tunes anymore to make it big and Gully Boy showed us just that. The film revolved around a boy named Murad, who like you may have guessed, is from the streets.

The film has you so engrossed in his story that you end up feeling like a part of Murad’s (Ranveer Singh) world.

While the concept of hip hop, which is used to describe his journey might be specific, we’ve all had similar struggles to deal with in our life that we work hard to come through. In fact, throughout the film there is a running conversation about dreams and every character in the movie fights in its own way to achieve those dreams. The film takes us through Murad’s journey from rapping on the streets of Dharavi to opening at a professional concert for NAS. Although Murad had the words, he needed a bit of polishing when it comes to the rhythm. He finds the perfect mentor in MC Sher (Siddharth Chaturvedi).

Siddharth delivers a spectacular performance in the film and judging by the confidence he exudes we really find it hard to believe that it is his debut film. Despite a short screen time, Alia Bhatt too makes a strong impression in the film. Another reason for the film turning into such a high grosser at the box-office is the music. Zoya Akhtar decided to stay true to the roots of her concept and opted for artists that have actually made it from the streets. Songs like Apna Time Aayega, Asli Hip Hop and Azaadi became chartbusters even before the release of the film.

Even though the Dhamaal franchise may not be as popular as Golmaal or Housefull, the fact that both the instalments were such high grossers does prove that it has good recall value. And this high grosser, the makers went ahead and increased the hype even more by getting stars like Ajay Devgn, Madhuri Dixit and Anil Kapoor on board.

Keeping it similar to the previous two versions, Total Dhamaal is a film about a bunch of greedy madcap characters on an adventure. Although films with such a big star cast tend to get too cluttered at times, director Indra Kumar does a nice job in maintaining the balance between them.

To sum it up, Total Dhamaal delivers what it promises – laughs and a lot of it. The characters are all grouped in pairs and they manage to bring out a few giggles. If you’re looking for a light hearted comedy then this high grosser is just for you.

Ek Ladki Ko Dekha Toh Aisa Laga is primarily a simple love story but there is a lot of subtext in the narrative that makes it one of the most important films of our times. The high grosser revolves around Sweety Chaudhury (Sonam Kapoor), who hails from an influential family in Moga, Punjab. Her father (Anil Kapoor) is a rich garment businessman. One day, she runs into a playwright named Sahil Mirza (Rajkummar Rao), who instantly falls in love with her. But little does Sahil know that Sweety has a little secret of her own. The film has everything that you see in a typical Bollywood romantic movie – two people meet, fall in love, face opposition from the family and society, but by the end, everything falls into place.

However, this time, the lovebirds are of the same gender. The best part about the high grosser is that it was able to deliver a message without turning into a sob story as the film comes with a healthy dose of humour. The high grosser has few stand out scenes that are extremely relatable and are sure to stay in your heart long after you watch the film. Like the moment when Anil Kapoor reads Sonam’s diary and the climactic scene about his outburst. Anil’s brilliant performance in that scene definitely will strike a chord with you and make your realise that there exists people amongst us who are free and yet caged. Another bonus point in the high grosser is the adorable romance between Juhi Chawla and Anil Kapoor. Even after all these years, their chemistry is on point.