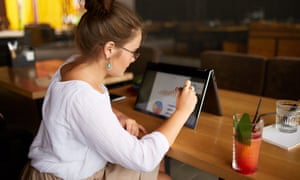 Back in the day, if your shorthand didn’t stretch to 100 words a minute, your chances of landing a journalism job were sketchy. These skills are now pretty much redundant – better to know how to whip up a frenzy on social media, build an interactive graphic, or number-crunch data. And with Cisco forecasting more than 1m minutes of video shared every second by 2021, understanding images has never been so important.

“Keeping up to date is a challenge for universities,” says former BBC journalist Lisette Johnston, now head of school at ScreenSpace in London, sister to MetFilm School, where postgraduate numbers are rising. “But the most impressive master’s programmes are those that replicate real working life – industry deadlines, working with others and so on.”

However, media and news companies say they can’t actually find enough candidates with the skills they want, and universities have taken to reviewing and updating postgraduate media courses annually. Queen Margaret University in Edinburgh is one of many that have launched courses responding to industry needs for visually literate “content creators”.

“The media industry is evolving at an unparalleled rate,” says Simon Hinde, programme director of journalism and publishing at the London College of Communication, where programmes have changed dramatically in the past five years. “Courses are fully multimedia – we publish web first, there’s a much greater focus on the innovative use of social media and we’ve introduced data journalism.”

Knowing how to get to a story via data and freedom of information requests is one of the most prized skills, says Paul Bradshaw, who heads up the master’s courses in data journalism and multiplatform and mobile journalism at Birmingham City University. “We struggle to meet demand from employers wanting students who can analyse data. All news organisations are expanding in this area.”

But journalism students have tended to think conservatively, he says. Magazine courses were traditionally oversubscribed, while data journalism has attracted fewer applicants at popular UK universities. “Intellectually, students understand the need for these skills, but they think they will be the exception who gets to write beautiful flowing features for magazines, and never has to deal with spreadsheets.”

He cites a Birmingham story about a planned rise in police patrols and stop and search after a spate of knife crime incidents. Journalists used data to determine which areas of the city were most subjected to stop and search. They then supplemented this with traditional reporting, by speaking to the communities affected, to give context.

Even experienced journalists have enrolled on postgraduate courses to sharpen data skills, he says, and they don’t need a technical background. “We teach all that – analytical ways of approaching a problem or how to calculate a percentage.”

Equally, expertise in social media, video and data could make the difference between simply shadowing during a work placement and being offered a job. “You need something that sets you apart,” says Bradshaw. “You want to be the one with specialist skills that they don’t want to let go after an internship.”

Knowing how to make a story stand out amid millions of others is more important than ever, given the sheer bulk of online content. “As people scan and scroll, you now have even less time to capture their attention,” says Ed Preedy, managing director at GumGum, which uses image recognition technology to reach targeted audiences. “Images are a powerful way to communicate complex things. For journalists, this technology is there to be embraced.”

But judging what future media jobs might look like is an inexact science, says Hinde, who began working in newspapers in the early 1990s, before working with Yahoo! and Sky. “These types of jobs couldn’t have been predicted a decade earlier.” Now virtual reality, 360-degree video and other visual forms are emerging. “The key thing is to allow students to develop their own authentic voice. Nobody knows what jobs today’s postgraduates will be doing in 10 years’ time.”