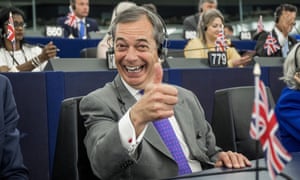 Nigel Farage is earning at least €30,000 (£26,900) a month from his media company Thorn in the Side, his latest earnings declaration reveals.

Members of the European parliament are required to declare all income earned on top of their pre-tax monthly MEP salaries of €8,758.

A declaration by Farage dated 1 July shows he earned at least €30,000 a month gross as director of Thorn in the Side Limited. Farage also declared his role as unpaid leader of the Brexit party.

Farage is the sole director of Thorn in the Side, a company he founded in 2011 to handle earnings from media appearances and lectures. The latest accountsrevealed a big jump in the company’s assets, reaching £548,573 for the year to May 2018, compared with just over £157,000 for the previous year.

The European parliament declaration, filed shortly before Farage began his fifth consecutive mandate as an MEP, suggests Thorn in the Side is maintaining healthy post-Brexit earnings.

A spokesman for Farage confirmed the Guardian’s reading of the declaration but declined to comment. MEPs are required to report their external incomes to the nearest €10,000.

Farage recently fell foul of the European parliament’s obligation to reveal expenses after it was claimed he had failed to declare lavish gifts from the Brexit-supporting tycoon Arron Banks, including rent on a £4.4m Chelsea home with fixtures and fittings, a car with a driver and a promotional tour in the US.

Farage initially refused to comment on the claims, while Banks dismissed them as a smear.

Last week, a European parliament advisory committee concluded that Farage should face the “highest penalty” for a “serious breach” of the code of conduct, according to a leaked letter obtained by Channel 4 News.

Under European parliament rules, the decision on penalties is made by its president. The Guardian has learned that the current president, Antonio Tajani, whose term is ending, has decided to pass the dossier on to his successor rather than act on the committee’s recommendations.

The European parliament has long been reluctant to throw the book at members found to have breached its code of conduct. According to Transparency International, 24 MEPs were found to have broken ethics rules between 2014 and 2018, and only one reprimand was issued and none were sanctioned.

Offences included six MEPs failing to declare luxury trips funded by Azerbaijan’s autocratic government. Another MEP was censured for tabling 200 amendments to the EU’s data protection rules that had been copied word for word from lobbyists.

Farage is one of the highest earners in the European parliament but had the worst attendance record among British MEPs. Over a four-year period between 2014 and 2018, he took part in only 40% of rollcall votes, according to researchers at VoteWatch Europe.

Brexit party MEPs marked their arrival in Strasbourg for the new parliament’s opening session on Tuesday by turning their backs on a quartet playing the European anthem Ode to Joy.

000 A at Company earns Farage From least Media Month: Nigel €30 2019-07-03
Loknath Das
to in With for and of on India The Launched at Samsung Launch A iPhone Android Galaxy More Apple Rs New Be 7 Price Google