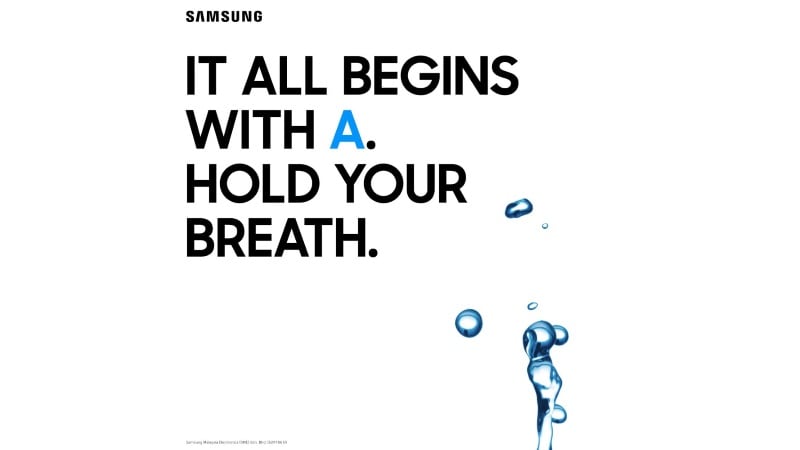 Earlier last month, rumours suggested that Samsung’s alleged Galaxy A7 (2017) smartphone will come with IP68 certification, making it highly resistant to dust and water. Now, the South Korean company has added further fuel to these rumours as it has teased water resistance feature for next generation of devices in its Galaxy A Series of smartphones – which are anticipated to be launched at CES 2017 next week.

Samsung Malaysia’s Twitter account posted the official teaser for the upcoming phones in the Galaxy A Series on Monday. The company said, “It all begins with A. Hold your breath.” If this was not hint enough, the company even added some water droplets into the image to make the matters more clear. However, it still remains to be seen if all phones from the series will get the water resistance or certain models.

The Galaxy A7 (2017) smartphone is expected to pack a 5.7-inch Super AMOLED full-HD (1080×1920 pixels) display, making it slightly larger than its predecessor. The device is expected to be powered by Samsung’s octa-core Exynos 7880 processor coupled with 3GB of RAM and 32GB inbuilt storage, which will be expandable via microSD card.

As per the rumours, the upcoming Galaxy A7 (2017) will come with a 16-megapixel front camera with f/1.9 aperture. Samsung has been tipped to go for the same 16-megapixel module that is seen in the Galaxy C9 Pro. Further, the rear camera on the phone is also expected to be 16-megapixel.

The new Galaxy A Series phones are expected to be unveiled by the company at its CES 2017 event next month and as the rumours regarding the other models in the series are thin, we will have to wait for the official announcement by the company.
[“source-ndtv”]