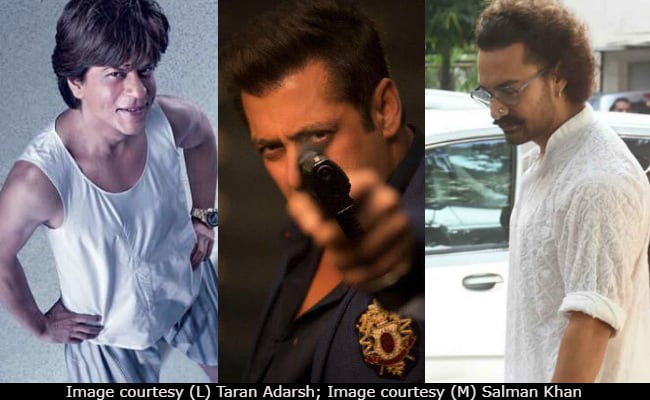 Bollywood has big plans for movie buffs in 2018. “The three Khans to arrive with their movies during festivals in 2018,” tweeted trade analyst Taran Adarsh at the beginning of the New Year. 2018 actually kicked off with a blockbuster announcement – details of the much awaited Shah Rukh Khan film with Aanand L Rai were revealed on January 1, and now we know that Christmas is booked for the much-talked about movie. Shah Rukh was the last one to announce his 2018 release while the other major festival dates – Eid and Diwali – were already booked for Salman Khan and Aamir Khan movies, respectively.

Here’s a low down of what to expect from 2018, a la Bollywood-Khan style.

Salman Khan has joined the Race franchise and will headline the third instalment of the series. Eid means it’s time for the Bollywood Bhaijaan to arrive at the theatres. And not just 2018, Salman has booked Eid for next year as well. This year Eid, Salman releases Race 3on June 14, which also stars Daisy Shah, Saqib Saleem and Bobby Deol. Produced by Ramesh Taurani, Race 3 will be directed by Remo D’Souza. Well, well, well, Eid 2018 will see Salman’s film clash with Fanne Khan, headlined by Aishwarya Rai Bachchan and Anil Kapoor.

In 2019, Ali Abbas Zafar will direct Salman Khan’s Bharat, which too will release on Eid. Salman Khan’s 2017 Eid release was Tubelight, which is said to have underperformed at the box office.

Aamir Khan Is The New Thug On The Block:

Aamir Khan has occupied the Eid 2018 window for Thugs Of Hindostan – his first film with Amitabh Bachchan, and his second project with both Fatima Sana Shaikh and Katrina Kaif. Directed by Vijay Krishna Acharya, the movie went on floors in early 2017 and is scheduled to hit screens during Diwali. Aamir also has a history of booking festival dates – his last film Secret Superstar was 2017’s Christmas offering while Dangal released on Christmas 2016 and PK on Diwali 2014. Thugs Of Hindostan is expected to have an uninterrupted box office run till Hrithik Roshan’s Super 30 releases on November 23.
Shah Rukh Khan And His Pint-Sized Kirdaar:

The wait for Shah Rukh Khan’s Zero is a little longer as it releases on December 21, when it is most likely to clash with Abhishek Kapoor’s Kedarnath – Sara Ali Khan’s first film. Currently, both films hold their grounds for a Christmas release but KriArj Entertainment, which produces Sara’s first film, is reportedly in talks with the 52-year-old superstar to arrive at a middle ground about the two films’ release dates. Shah Rukh plays the role of a dwarf in the movie, which also casts Katrina Kaif and Anushka Sharma in key roles. Zero marks Shah Rukh’s only release this year.

That’s not it, 2018 will witness more of Bollywood clashes. To start with, Akshay Kumar’s PadMan will have a box office collision with Neeraj Pandey’s crime drama Aiyaary – both are schedule for Republic Day. February will bring Anushka Sharma’s first film post-wedding Pari while the Padmavati is also expected to get a release date soon. Sanjay Leela Bhansali’s movie, starring Deepika Padukone, Shahid Kapoor and Ranveer Singh, was postponed following protests from several Rajput outfits but has finally received Censor Board’s clearance after five changes.
[“Source-ndtv”]
2018 and Big Clashes Excited Khans Much of The Year 2018-01-11
Loknath Das
to in With for and of on India The Launched at Samsung Launch A iPhone Android Galaxy More Apple New Rs Be 7 Price Google