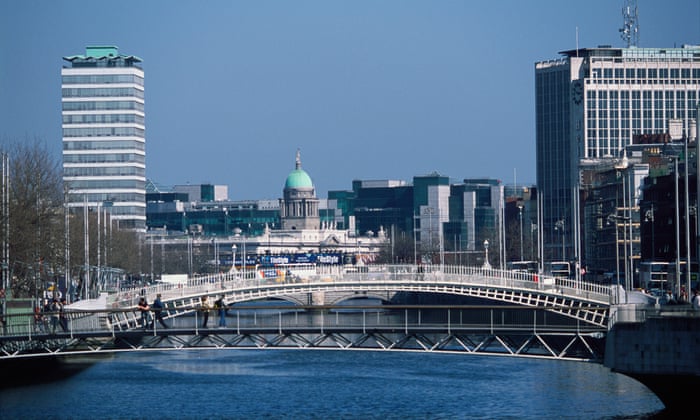 Irish business leaders have called for a €1bn state aid programme to guard against Brexit disruption, in the event that the UK quits the customs union.

The Irish Business and Employers Confederation wants the EU to cushion Irish exporters caught up in the chaos this would cause, giving them the space to “innovate, diversify into new markets, train staff and invest for the future”.

Danny McCoy, chief executive of Ibec, said the money would protect trade between Ireland and the UK, which could become a more serious competitor on the foreign investment front as it would be free to offer state aid and other incentives once outside the EU.

Ibec’s call comes as experts working on the technical challenges of achieving a “frictionless border” between the Republic of Ireland and Northern Ireland say that a “Nissan-type” state deal for cross-border agri-food businesses may be also be needed.

At a briefing in Brussels, McCoy warned that the UK government was leading Britain towards an “economically calamitous Brexit divorce”.

He said the UK’s approach continued “to put short-term political concerns ahead of jobs and the needs of business, without any regard for established trading relationships”.

“If the UK insists on such a policy of self-harm, a long transition period would be needed to allow companies time to adapt,” he added.

McCoy said Brexit’s impact on Ireland should be treated like a “force majeure” inflicted on Irish business.

Northern Irish agriculture leaders have previously warned that farmers could go out of business if trade barriers that made them less competitive were imposed.

“In the case of a fraught exit, funds amounting to up to €1bn over three years may be needed from domestic and EU sources to help Irish companies innovate, diversify into new markets, train staff and invest for the future,” said McCoy.

The Irish agri-food sector is concerned about the prospect of tariffs which, for beef and dairy, are among the highest imposed under World Trade Organisation rules.

Ibec says they could be crippling for businesses that rely heavily on cross-border production and trade.

About a third of milk from cows in Northern Ireland is transported across the border for production into butter, cheese and infant formula.

Eoin Magennis, senior economist at Ulster University, has calculated that the cost of tariffs on cross-border production would amount to €250-€350m a year, based on 2015 trade figures.

“We looked at the levels of cross-border trade right across the board and 70% of those tariffs would be payable on food,” Magennis said. “So the question is do both Irish and British governments just take a hit and pay that tariff to protect those businesses? Maybe there’s a Nissan-type deal to be done here on agri-food.”

He was referring to the unspecified investment pledges the Japanese car manufacturer got from Theresa May to stay in Sunderland following the EU referendum.

However, such a deal would be controversial and possibly illegal under WTO rules and could prompt protests by Scottish and Welsh producers also exporting to the EU, said Michael Lux, a customs lawyer with 40 years experience including a stint at the European commission.

“There would be some issues with compatibility with international law,” said Lux. “If you say I’d support your investments, under the subvention agreement of the WTO, that might be a problem and lead to accusations of unfair state subsidies.”

[“Source-.theguardian”]
Aid Brexi Business by EU Firms Hit in Irish Protect Seeks to €1bn 2017-07-13
Loknath Das
to in With for and of on India The Launched at Samsung Launch A iPhone Android Galaxy More Apple Rs New Be 7 Price Google